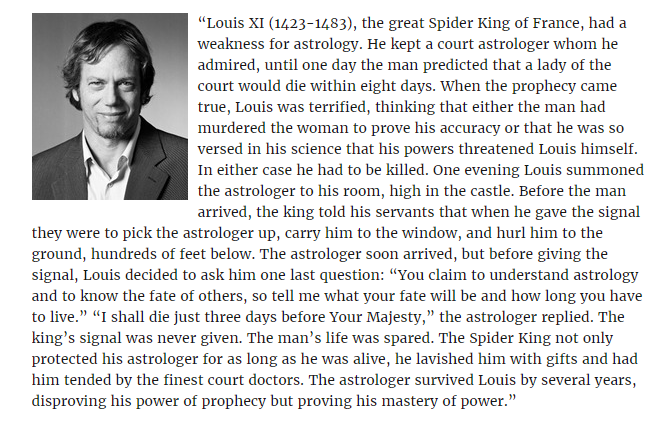 “Louis XI (1423-1483), the great Spider King of France, had a weakness for astrology. He kept a court astrologer whom he admired, until one day the man predicted that a lady of the court would die within eight days. When the prophecy came true, Louis was terrified, thinking that either the man had murdered the woman to prove his accuracy or that he was so versed in his science that his powers threatened Louis himself. In either case he had to be killed. One evening Louis summoned the astrologer to his room, high in the castle. Before the man arrived, the king told his servants that when he gave the signal they were to pick the astrologer up, carry him to the window, and hurl him to the ground, hundreds of feet below. The astrologer soon arrived, but before giving the signal, Louis decided to ask him one last question: “You claim to understand astrology and to know the fate of others, so tell me what your fate will be and how long you have to live.” “I shall die just three days before Your Majesty,” the astrologer replied. The king’s signal was never given. The man’s life was spared. The Spider King not only protected his astrologer for as long as he was alive, he lavished him with gifts and had him tended by the finest court doctors. The astrologer survived Louis by several years, disproving his power of prophecy but proving his mastery of power.”