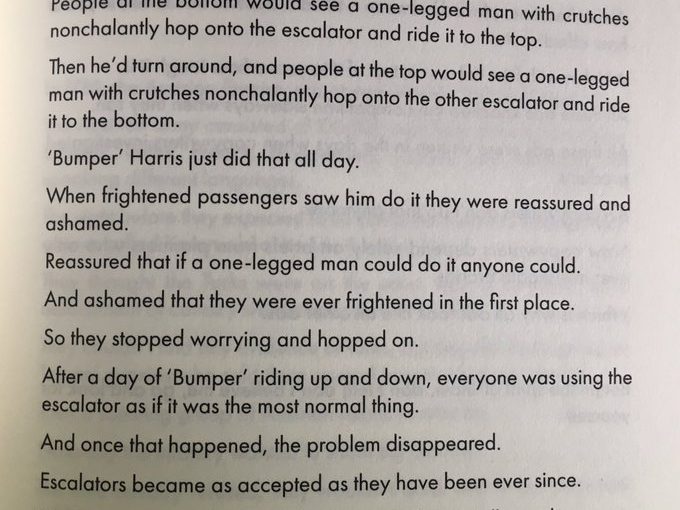 Then someone had a brilliant idea: proof always works better than a claim.

William ‘Bumper’ Harris was an employee who’d lost a leg in an accident.

He was told to come to Earl’s Court station and ride up and down the escalator.

Just that, ride up and down, nothing else.

People at the bottom would see a one-legged man with crutches nonchalantly hop onto the escalator and ride it to the top.

Then he’d turn around, and people at the top would see a one-legged man with crutches nonchalantly hop onto the other escalator and ride it to the bottom.

‘Bumper’ Harris just did that all day.

When frightened passengers saw him do it they were reassured an ashamed.

Reassured that if a one-legged man could do it anyone could.

And ashamed that they were ever frightened in the first place.

After a day of ‘Bumper’ riding up and down, everyone was using the escalator as if it was the most normal thing.

And once that happened, the problem disappeared.

Escalators became as accepted as the have been ever since.

The lesson was, it’s better to show people than to tell people.