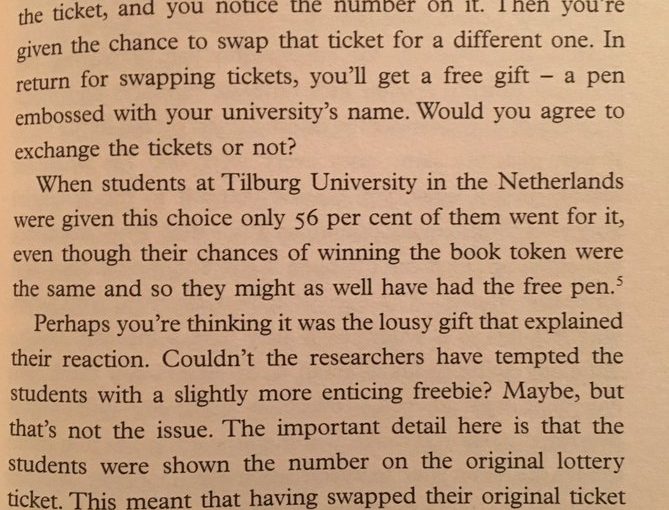 Imagine you’re a student. You’re offered a free lottery ticket with the chance to win a 15 euro book token. You’re shown the ticket, and you notice the number on it. Then you’re given the chance to swap that ticket for a different one. In return for swapping tickets, you’ll get a free gift – a pen embossed with your university’s name. Would you agree to exchange the tickets or not?

When students at Tilburg University in the Netherlands were given this choice only 56 per cent of them went for it, even though their chances of winning the book token were the same and so they might as well have had the free pen.”

Perhaps you’re thinking it was the lousy gift that explained their reaction. Couldn’t the researchers have tempted the students with a slightly more enticing freebie? Maybe, but that’s not the issue. The important detail here is that the students were shown the number on the original lottery ticket. This meant that having swapped their original ticket for another, if the number on the original was drawn out of the hat, they would know they’d made the wrong decision.

That said, if you live in the Netherlands, some lottery organisers are one step ahead. In a fiendish example of the exploitation of regret aversion, they’ve designed a lottery in which everyone’s unique postcode is automatically entered into the draw. Although you can only win if you’ve paid for a ticket, in any given week you can look up to see whether you’d have won, if only you had bothered to enter.

Excerpt from: Mind Over Money: The Psychology of Money and How To Use It Better by Claudia Hammond