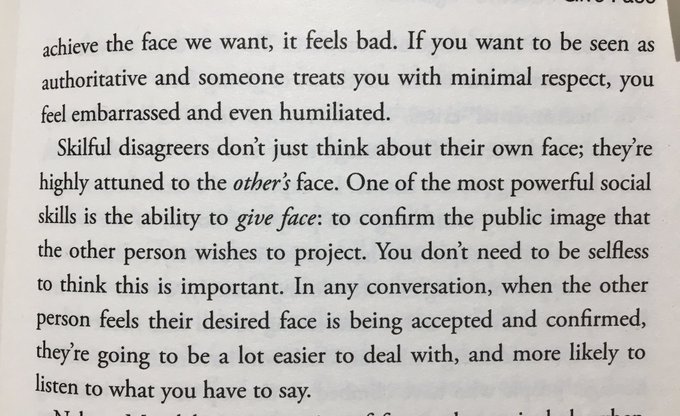 As you start talking, what impression of yourself do You want to convey? The sociologist Erving Goffman called this desired impression your face: the public image a person wants to establish in a social interaction.

We put effort into establishing the appropriate face for each encounter. The face you want to show a potential boss will be different to the face you want to show someone on a date. Goffman called this effort facework. With people we trust and know well, we don’t worry so much about face. With those we don’t know— especially if those people have some power over us — we put in the facework. When we put in the facework and we still don’t achieve the face we want, it feels bad. If you want to be seen as authoritative and someone treats you with minimal respect, you feel embarrassed and even humiliated.

Skillful disagreers don’t just think about their own face; they’re highly attuned to the other’ face. One of the most powerful social skills is the ability to give face: to confirm the public image that the other person wishes to project. You don’t need to be selfless to think this is important. In any conversation, when the other person feels their desired face is being accepted and confirmed, they’re going to be a lot easier to deal with, and more likely to listen to what you have to say.

Excerpt from: Conflicted: Why Arguments Are Tearing Us Apart and How They Can Bring Us Together by Ian Leslie