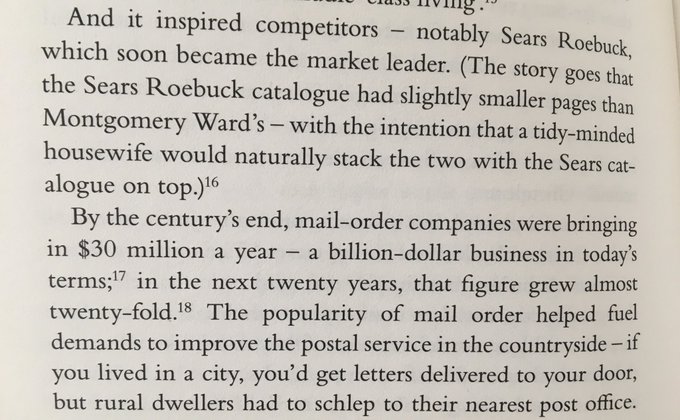 And it inspired competitors – notably Sears Roebuck, which soon became the market leader. (The story goes that the Sears Roebuck catalogue had slightly smaller pages than Montgomery Ward’s – with the intention that a tidy-minded housewife would naturally stack the two with the Sears catalogue on top.)

By the century’s end, mail-order companies were bringing in $30 million a year – a billion-dollar business in today’s terms; in the next twenty years, that figure grew almost twenty-fold. The popularity of mail order helped fuel demands to improve the postal service in the countryside – if you lived in a city, you’d get letters delivered to your door, but rural dwellers had to schlep to their nearest post office.

Excerpt from: The Next Fifty Things that Made the Modern Economy by Tim Harford