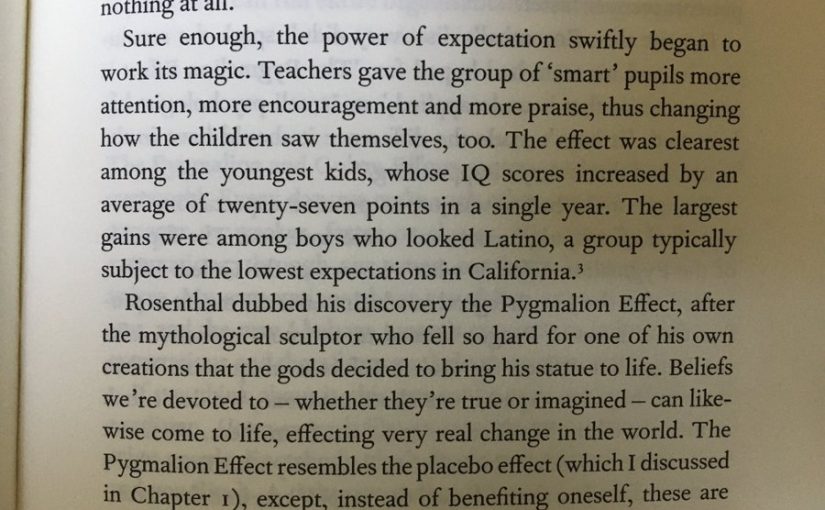 When the new school year started, teachers at Spruce Elementary learned that an acclaimed scientist by the name of Dr Rosenthal would be administering a test to their pupils. This ‘Test of Inflected Acquisition’ indicated who would make the greatest strides at school that year. In truth it was a common or garden IQ test, and, once the scores had been tallied, Rosenthal and his team cast them all aside. They tossed a coin to decide which kids they would tell teachers were ‘high-potentials’. The kids, meanwhile, were told nothing at all. Sure enough, the power of expectation swiftly began to work its magic. Teachers gave the group of ‘smart’ pupils more attention, more encouragement and more praise, thus changing how the children saw themselves, too. The effect was clearest among the youngest kids, whose IQ scores increased by an average of twenty-seven points in a single year. The largest gains were among boys who looked Latino, a group typically subject to the lowest expectations in California.’ Rosenthal dubbed his discovery the Pygmalion Effect, after the mythological sculptor who fell so hard for one of his own creations that the gods decided to bring his statue to life. Beliefs we’re devoted to — whether they’re true or imagined — can like-wise come to life, effecting very real change in the world. The Pygmalion Effect resembles the placebo effect (which I discussed in Chapter 1), except, instead of benefiting oneself, these are expectations that benefit others.

Excerpt from: Humankind: A Hopeful History by Rutger Bregman