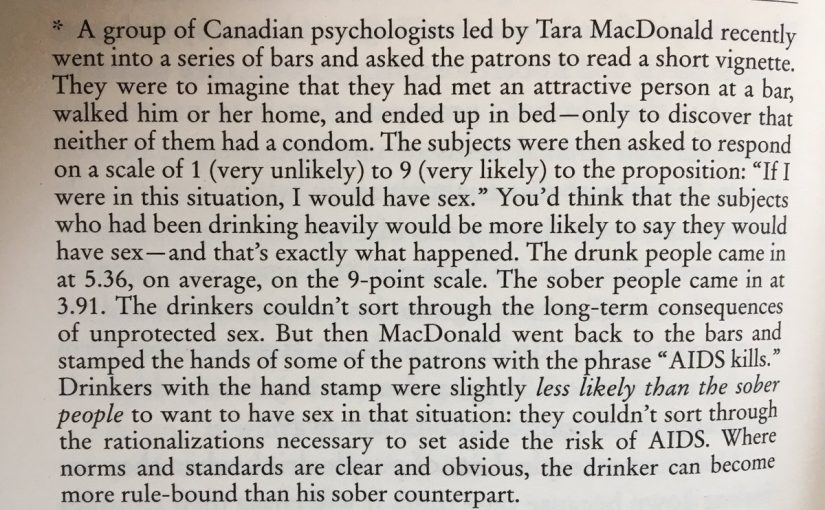 A group of Canadian psychologists led by Tara MacDonald recently went into a series of bars and asked the patrons to read a short vignette. They were to imagine that they had met an attractive person at a bar, walked him or her home, and ended up in bed — only to discover that neither of them had a condom. The subjects were then asked to respond on a scale of 1 (very unlikely) to 9 (very likely) to the proposition: “If I were in this situation, I would have sex.” You’d think that the subjects who had been drinking heavily would be more likely to say they would have sex — and that’s exactly what happened. The drunk people came in at 5.36, on average, on the 9-point scale. The sober people came in at 3.91. The drinkers couldn’t sort through the long-term consequences of unprotected sex. But then MacDonald went back to the bars and stamped the hands of some of the patrons with the phrase “AIDs kills.” Drinkers with the hand stamp were slightly less likely than the sober people to want to have sex in that situation: they couldn’t sort through the rationalization necessary to set aside the risk of AIDS. Where the norms and standards are clear and obvious, the drinker can become more rule-bound that his sober counterpart.

Excerpt from: Talking to Strangers: What We Should Know about the People We Don’t Know by Malcolm Gladwell