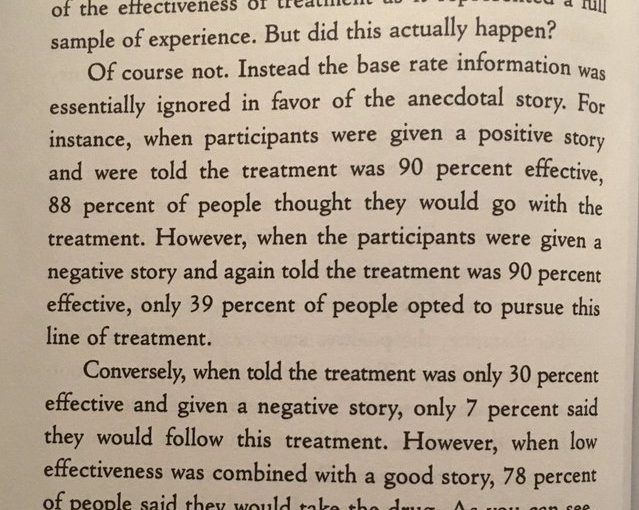 Another frightening example comes from the realm of medicine. This time participants were given information on the effectiveness of treatments as a percentage of those cured overall (ranging from 90 to 30 percent). This is known as base rate information. They were also given a story, which could be positive, negative, or ambiguous.

For instance, the positive story read as follows: Pat’s decision to undergo Tamoxol resulted in a positive outcome. The entire worm was destroyed. Doctors were confident the disease would not resume its course. At one-month post-treatment, Pat’s recovery was certain.

The negative story read: Pat’s decision to undergo Tamoxol resulted in a poor outcome. The worm was not completely destroyed. The disease resumed its course. At 1-month post-treatment, Pat was blind and had lost the ability to walk.

Subjects were then asked would they undergo the treatment if they were diagnosed with the disease. Of course, people should have relied upon the base rate information of the effectiveness of treatment as it represented a foil sample of experience. But did this actually happen?

Of course not. Instead the base rate information was essentially ignored in favor of the anecdotal story. For instance, when participants were given a positive story and were told the treatment was 90 percent effective, 88 percent of people thought they would go with the treatment. However, when the participants were given a negative story and again told the treatment was 90 percent effective, only 39 percent of people opted to pursue this line of treatment.