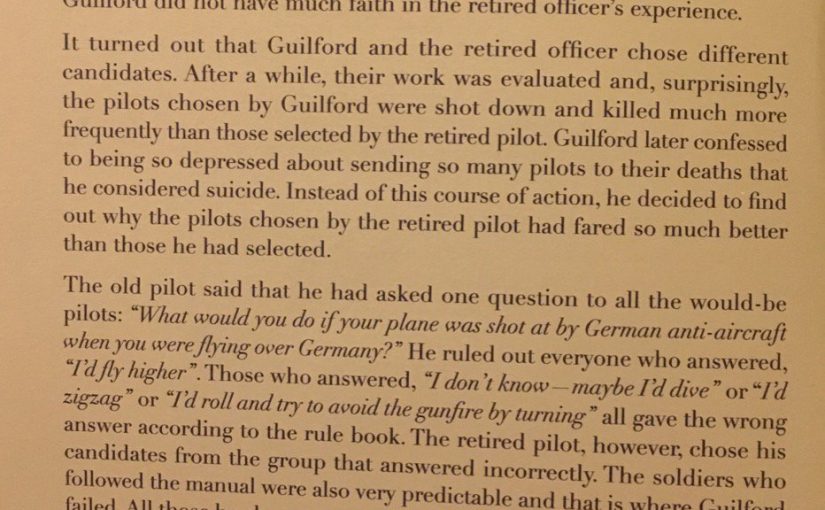 Guilford’s own story is an interesting one. He was a psychologist who, during the Second World War, worked on personality tests designed to pick out the most suitable bomber pilot candidates. In order to do this, Guilford used intelligence tests, a grading system and personal interviews. He was annoyed because the Air Force had also assigned a retired air force pilot without psychological training to help in the selection process. Guilford did not have much faith in the retired officer’s experience.

It turned out that Guilford and the retired officer chose different candidates. After a while, their work was evaluated and, surprisingly, the pilots chosen by Guilford were shot down and killed much more frequently than those selected by the retired pilot. Guilford later confessed to being so depressed about sending so many pilots to their deaths that he considered suicide. Instead of this course of action, he decided to find out why the pilots chosen by the retired pilot had fared so much better than those he had selected.

The old pilot said that he had asked one question to all the would-be pilots: “What would you do if your plane was shot at by German anti-aircraft when you were flying over Germany?” He ruled out everyone who answered, I’d fly higher’. Those who answered, “I don’t know — maybe I’d dive ” or “I’d zigzag” or “I’d roll and try to avoid the gunfire by turning” all gave the wrong answer according to the rule book. The retired pilot, however, chose his candidates from the group that answered incorrectly. The soldiers who followed the manual were also very predictable and that is where Guilford failed. All those he chose answered according to the manual. The problem was that even the Germans knew that you should fly higher when under fire and their fighter planes therefore lay in wait above the clouds ready to shoot down the American pilots. In other words, it was the creative pilots who survived more often than those who may have been more intelligent, but who stuck by the rules!

Excerpt from: The Idea Book by Fredrik Härén