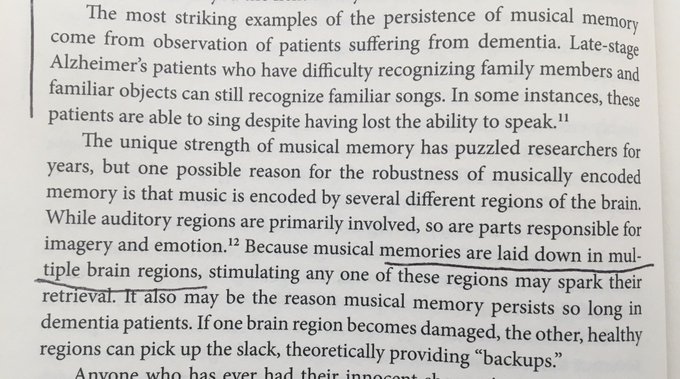 The most striking examples of the persistence of musical memory come from observation of patients suffering from dementia. Late-stage Alzheimer’s patients who have difficulty recognizing family members and familiar objects can still recognize familiar songs. In some instances, these patients are able to sing despite having lost the ability to speak.”

The unique strength of musical memory has puzzled researchers for years, but one possible reason for the robustness of musically encoded memory is that music is encoded by several different regions of the brain. While auditory regions are primarily involved, so are parts responsible for imagery and emotion. Because musical memories are laid down in multiple brain regions, stimulating any one of these regions may spark their retrieval. It also may be the reason musical memory persists so long in dementia patients. If one brain region becomes damaged, the other, healthy regions can pick up the slack, theoretically providing “backups.”