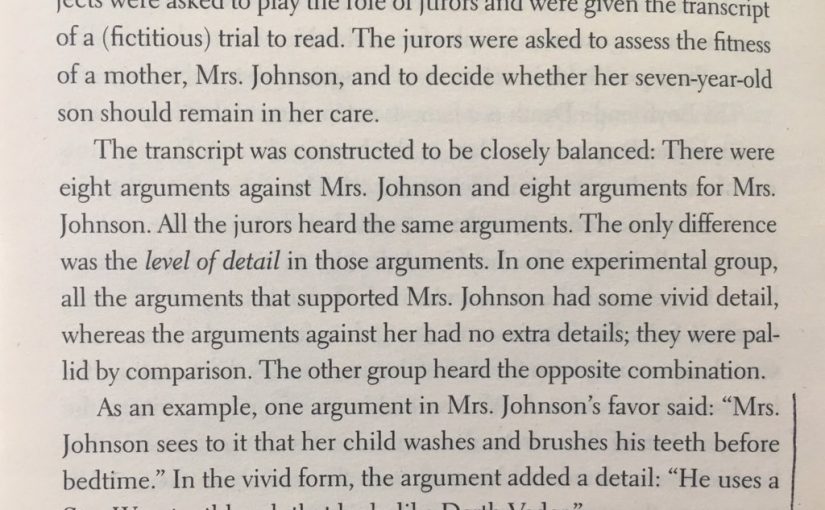 In 1986, Jonathan Shedler and Melvin Manis, researchers at the University of Michigan, created an experiment to simulate a trial. Subjects were asked to play the role of jurors and were given the transcript of a (fictitious) trial to read. The jurors were asked to assess the fitness of a mother, Mrs. Johnson, and to decide whether her seven-year-old son should remain in her care.

As an example, one argument in Mrs. Johnson’s favor said: “Mrs. Johnson sees to it that her child washes and brushes his teeth before bedtime.” In the vivid form, the argument added a detail: “He uses a Star Wars toothbrush that looks like Darth Vader.”

An argument against Mrs. Johnson was: “The child went to school with a badly scraped arm which Mrs. Johnson had not cleaned or attended to. The school nurse had to clean the scrape.” The vivid form added the detail that, as the nurse was cleaning the scrape, she spilled Mercurochrome on herself, staining her uniform red.

The researchers carefully tested the arguments with and without vivid details to ensure that they had the same perceived importance — the details were designed to be irrelevant to the judgment of Mrs. Johnson’s worthiness. It mattered that Mrs. Johnson didn’t attend to the scarped arm; it didn’t matter that the nurse’s uniform got stained in the process.