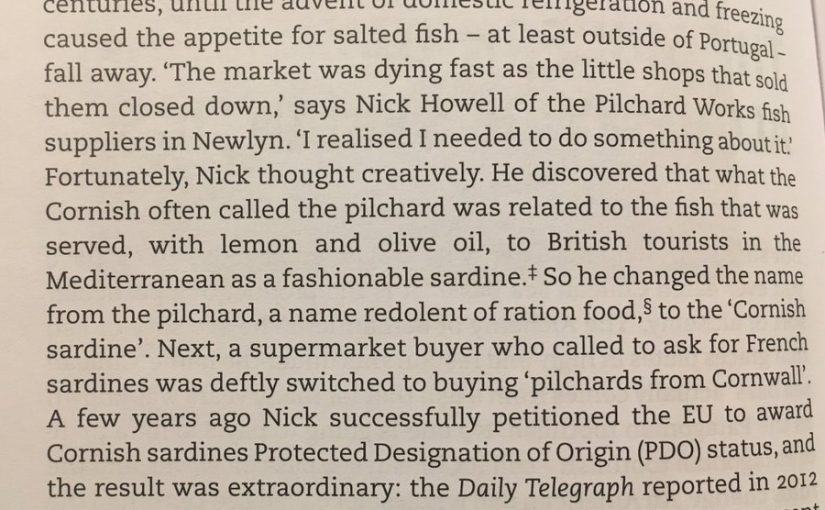 Caught off the Cornish coast before being salted and shipped all over Europe, they had been a delicacy for centuries, until the advent of domestic refrigeration and freezing caused the appetite for salted fish – at least outside of Portugal – fall away. “The market was dying fast as the little shops that sold them closed down,’ says Nick Howell of the Pilchard Works fish suppliers in Newlyn. ‘I realised I needed to do something about it.’ Fortunately, Nick though creatively. He discovered that what the Cornish often called the pilchard was related to the fish that was served, with lemon and olive oil, to British tourists in the Mediterranean as a fashionable sardine. So he changed the name from the pilchard, a name redolent of ration food, to the ‘Cornish sardine’. Next, a supermarket buyer who called to ask for French sardines was deftly switched to buying ‘pilchards from Cornwall’. A few years ago Nick successfully petitioned the EU to award Cornish sardines Protected Designation of Origin (PDO) status, and the result was extraordinary: the Daily Telegraph reported in 2012 that sales of fresh sardines at Tesco had rocketed by 180 per cent in the past year, an increase that was partly explained by a huge increase in the sales of Cornish sardines.