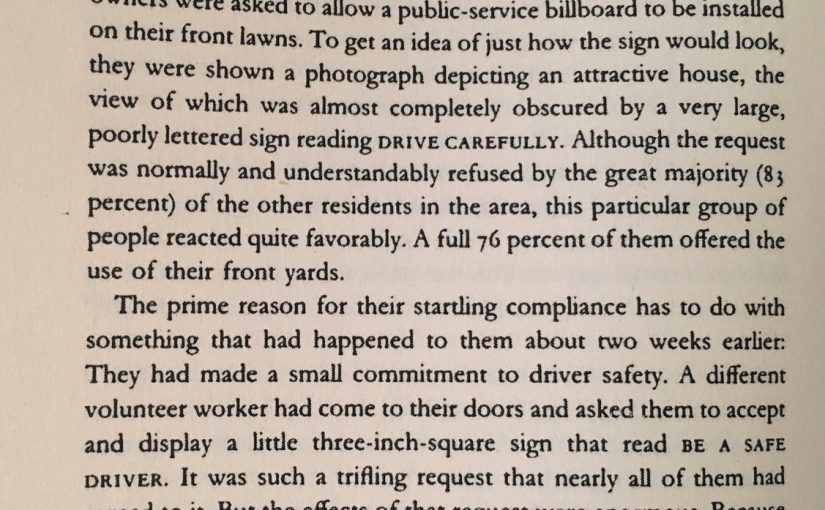 In the mid-1960s psychologists Jonathan Freedman and Scott Fraser published an astonishing set of data. They reported the result of an experiment in which a researcher, posing as a volunteer worker, had gone door to door in a residential California neighborhood making a preposterous request of homeowners. The homeowners were asked to allow a public-service billboard to be installed on their front lawns. To get an idea of just how the sign would look, they were shown a photograph depicting an attractive house, the view of which was almost completely obscured by a very large, poorly lettered sign reading DRIVE CAREFULLY. Although the request was normally and understandably refused by the great majority (83 percent) of the other residents in the area, this particular group of people reacted quite favorably. A full 76 percent of them offered the use of their front yards.

The prime reason for their startling compliance has to do with something that had happened to them about two weeks earlier: They had made a small commitment to driver safety. A different volunteer worker had come to their doors and asked them to accept and display a little three-inch-square sign that read BE A SAFE DRIVER. It was such a trifling request that nearly all of them had agreed to it. But the effects of that request were enormous. Because they had innocently complied with a trivial safe-driving request a couple of weeks before, these homeowners became remarkably willing to comply with another such request that was massive in size.