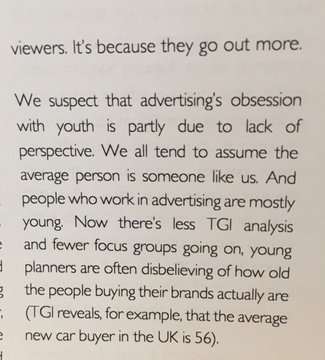 Next, it’s argued that Millennials represent the future. What they do now, everyone will be doing one day. This is probably the weakest argument of all. Our job is to sell to society as it is now. Not as it will be in 10 years’ time. Young people change behaviour as they grow older, so they’re not always a reliable guide to the future. We need to distinguish ‘life-status effect’ from ‘cohort effect’. Just because young people watch less TV than average, TV viewing is not necessarily bound to decline in the future. Young people have always watched less TV than older viewers because they go out more.

We suspect that advertising’s obsession with youth is partly due to lack of perspective. We all tend to assume the average person is someone like us. And people who work in advertising are mostly young. Now there’s less TGI analysis and fewer focus groups going on, young planners are often disbelieving of how old the people buying their brands actually are (TGI reveals, for example, that the average new car buyer in the UK is 56).