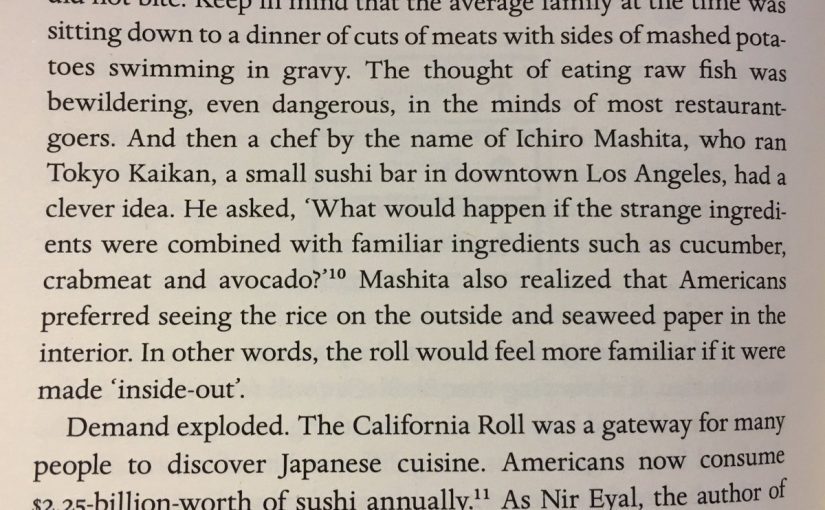 The concept of sushi was introduced into the United States during the late 1960s, a period of whirlwind change in tastes — entertainment, music, fashion and food. At first, the idea of sushi did not bite. Keep in mind that the average family at the time was sitting down to a dinner of cuts of meats with sides of mashed potatoes swimming in gravy. The thought of eating raw fish was bewildering, even dangerous, in the minds of most restaurant goers. And then a chef by the name of Ichiro Mashita, who ran Tokyo Kaikan, a small sushi bar in downtown Los Angeles, had a clever idea. He asked, ‘What would happen if the strange ingredients were combined with familiar ingredients such as cucumber, crabmeat and avocado? Mashita also realized that Americans preferred seeing the rice on the outside and seaweed paper in the interior. In other word, the roll would feel more familiar if it was made ‘inside-out’.

Demand exploded. The Californian Roll was a gateway for many people to discover Japanese cuisine. Americans now consume $2.25-billion-worth of sushi annually. As Nir Eyal, the author of Hooked, writes, ‘The lesson of the California Roll is simple – people don’t want something truly new, they want the familiar done differently.’