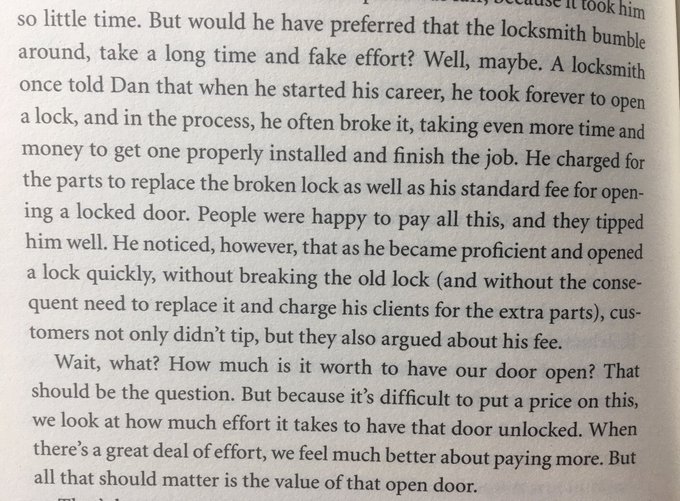 But would he have preferred that the locksmith bumble around, take a long time and fake effort? Well, maybe. A locksmith once told Dan that when he started his career, he took forever to open a lock, and in the process, he often broke it, taking even more time and money to get one properly installed and finish the job. He charged for the parts to replace the broken lock as well as his standard fee for opening a locked door. People were happy to pay all this, and they tipped him well. He noticed, however, that as he became proficient and opened a lock quickly, without breaking the old lock (and without the consequent need to replace it and charge his clients for the extra parts), customers not only didn’t tip, but they also argued about his fee.

Wait, what? How much is it worth to have our door open? That should be the question. But because it’s difficult to put a price on this, we look at how much effort it takes to have that door unlocked. When there’s a great deal of effort, we feel much better about paying more. But all that should matter is the value of that open door.

Excerpt from: Small Change: Money Mishaps and How to Avoid Them by Dan Ariely and Jeff Kreisler