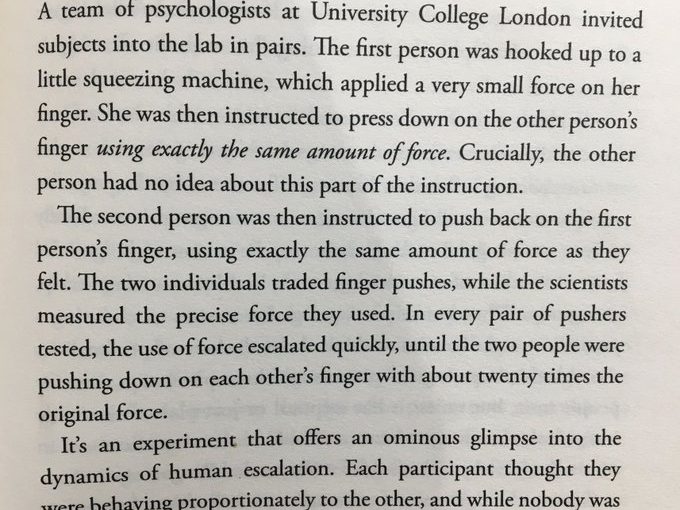 A team of psychologists at University College London invited subjects into the lab in pairs. The first person was hooked up to a little squeezing machine, which applied a very small force on her finger. She was then instructed to press down on the other person’s finger using exactly the same amount of force. Crucially, the other person had no idea about this part of the instruction.

‘The second person was then instructed to push back on the first person’s finger, using exactly the same amount of force as they felt. The two individuals traded finger pushes, while the scientists measured the precise force they used. In every pair of pushers tested, the use of force escalated quickly, until the two people were pushing down on each other’s finger with about twenty times the original force.

It’s an experiment that offers an ominous glimpse into the dynamics of human escalation. Each participant thought they were behaving proportionately to the other, and while nobody was deliberately raising the stakes, somehow the pressure rose anyway.

Excerpt from: Conflicted: Why Arguments Are Tearing Us Apart and How They Can Bring Us Together by Ian Leslie