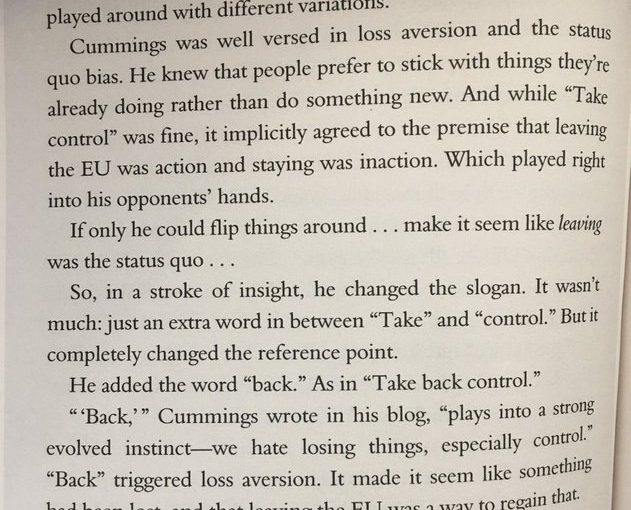 The slogan started as just two words: “Take control.” Cummings loved its simplicity but felt something was missing. So he played around with different variations.

Cummings was well versed in loss aversion and the statue quo bias. He knew that people prefer to stick with things they’re already doing rather than do something new. And while “Take control” was fine, it implicitly agreed to the premise that leaving the EU was action and staying was inaction. Which played right into his opponents’ hands.

So, in a stroke of insight, he changed the slogan. It wasn’t much: just an extra word in between “Take” and “control.” But it completely changed the reference point. He added the word “back.” As in “Take back control.”

“’Back,’” Cummings wrote in his blog, “plays into a strong evolved instinct—we hate losing things, especially control.” “Back” triggered loss aversion. It made it seem like something had been lost, and that leaving the EU was a way to regain that.

When the British Election Study surveyed voters,four times as many people preferred the “Let’s take back control” language.