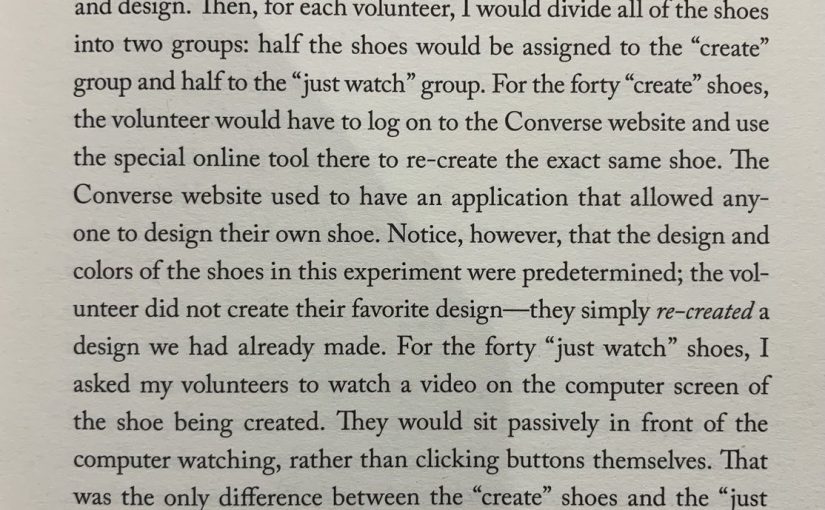 I designed an experiment to test this idea. It involved designing Converse shoes. First, I would invite volunteers into the lab and ask them to evaluate eighty different Converse shoes on a computer screen. Each shoe would be slightly different in color and design. Then, for each volunteer, I would divide all of the shoes into two groups: half the shoes would be assigned to the “create” group and half to the “just watch” group. For the forty “create” shoes, the volunteer would have to log on to the Converse website and use the special online tool there to recreate the exact same shoe. The Converse website used to have an application that allowed anyone to design their own shoe. Notice, however, that the design and colors of the shoes in this experiment were predetermined; the volunteers did not create their favorite design—they simply re-created a design we had already made. For the forty “just watch” shoes, I asked my volunteers to watch a video on the computer screen of the shoe being created. They would sit passively in front of the computer watching, rather than clicking buttons themselves. That was the only difference between the “create” shoes and the “just watch” shoes. When the volunteers were done, two hours later, they were asked to evaluate all the shoes again.

Similar to my oil painting saga, the volunteers liked the shoes they thought they had created two hours before better than the ones they remembered “just watching.”