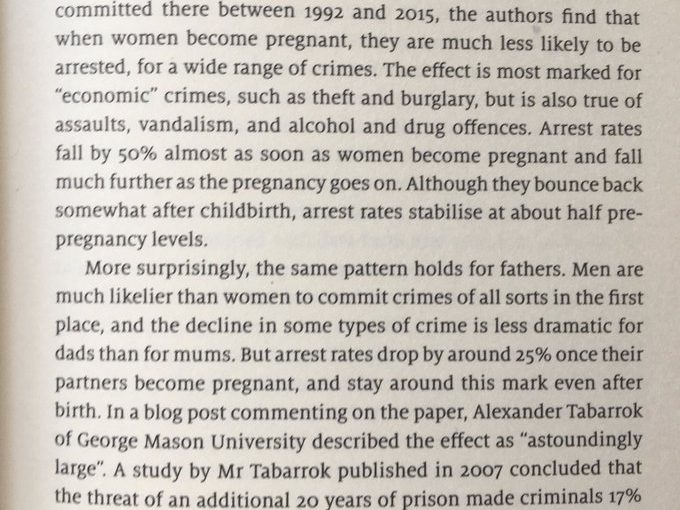 Using data on more than 1m babies born in Washington state between 1996 and 2009, and records of thousands of crimes committed there between 1992 and 2015, the authors find that when women become pregnant, they are much less likely to be arrested, for a wide range of crimes. The effective most marked for “economic” crimes, such as theft and burglary, but is also true of assaults, vandalism, and alcohol and drug offences. Arrest rates fall by 50%, almost as soon as women become pregnant and fall much further as the pregnancy goes on. Although they bounce back somewhat after childbirth, arrest rates stabilize at about half pre­ pregnancy levels.

More surprisingly, the same pattern holds for fathers. Men are much likelier than women to commit crimes of all sorts in the first place, and the decline in some types of crime is less dramatic for dads than for mums. But arrest rates drop by around 15% once their partners become pregnant, and stay around this mark even after birth. In a blog post commenting on the paper, Alexander Tabarrok of George Mason University described the effect as “astoundingly large”. A study by Mr. Tabarrok published in 2007 concluded that the threat of an additional 20 years of prison made criminals 17% less likely to reoffend; the prospect of fatherhood, it seems, is more salutary than that of two decades of incarceration.