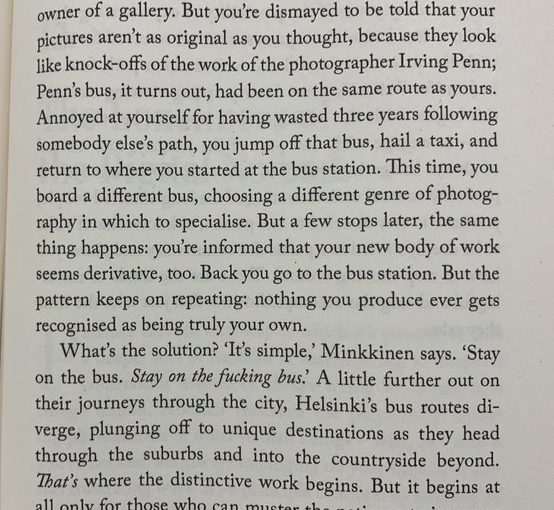 The final principle is that, more often than not, originality lies on the far side of unoriginality. The Finnish American photographer Arno Minkkinen dramatises this deep truth about the power of patience with a parable about Helsinki’, main bus station. There are two dozen platforms there, he explains, with several different bus lines departing from each one — and for the first part of its journey, each busk leaving from any given platform takes the same route through the city as all the others, making identical stops. Thinly’. each stop as representing one year of your career, Minkkinen advises photography students. You pick an artistic direction — perhaps you start working on platinum prints of nudes — and you begin to accumulate a portfolio of work. Three years (or bus stops) later, you proudly present it to the owner of a gallery. But you’re dismayed to be told that your pictures aren’t as original as you thought, because they look like knock-offs of the work of the photographer Irving Penn; Penn’s bus, it turns out, had been on the same route as yours. Annoyed at yourself for having wasted three years following somebody else’s path, you jump off that bus, hail a taxi, and return to where you started at the bus station. This time, you board a different bus, choosing a different genre of photography in which to specialise. But a few stops later, the same thing happens: you’re informed that your new body of work seems derivative, too. Back you go to the bus station. But the pattern keeps on repeating: nothing you produce ever gets recognised as being truly your own.

What’s the solution? ‘It’s simple,’ Minkkinen says. ‘Stay on the bus. Stay on the fucking bus.’ A little further out on their journeys through the city, Helsinki’s bus routes diverge, plunging off to unique destinations as they head through the suburbs and into the countryside beyond. That’s where the distinctive work begins. But it begins at all only for those who can muster the patience to immerse themselves in the earlier stage — the trial-and-error phase of copying others, learning new skills and accumulating experience.