Many years ago, the Ford Motor Company wanted to tell American motorists that they sold more convertibles than did any other automobile manufacturer. They could perfectly well have said: ‘America’s bestselling convertible.’ Instead they ran a headline that read: ‘The only convertible that outsells Ford.’ And the picture was of a baby-carriage. That is a kind of humour; and it’s almost a joke. It certainly depends entirely on a contribution from its audience for the communication to be complete. But the contribution is a small and pleasurable one, well within the capacity of anyone in the market for a car. And what could have been a piece of self-congratulatory manufacturer’s so-whattery became engaging evidence of confident leadership. The point had been seen. 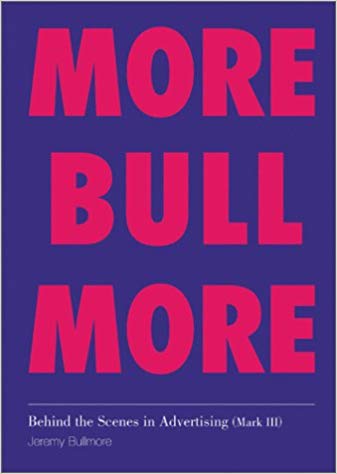 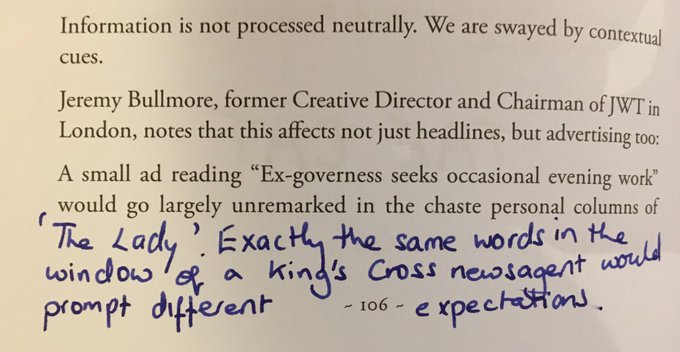 Information is not processed neutrally. We are swayed by contextual cues.

Jeremy Bullmore, former Creative Director and Chairman of JWT in London, notes that this affects not just headlines, but advertising too:

A small ad reading “Ex-governess seeks occasional evening work” would go largely unremarked in the chaste personal columns of ‘The Lady’. Exactly the same words in the window of a King’s Cross newsagent would prompt different expectations.

Everybody who’s written anything half-way useful about adverting has agreed that the most important decision a client company makes about advertising is the decision to advertise in the first place. The difference to a company’s long-term prosperity between advertising and not advertising is infinitely greater than any decision it might make between two alternative creative approaches or two competing advertising agencies.

But that, of course, is a very generic point of view. And agencies like all competitive brands, have little to gain from generic truths.

In his dense but thoughtful book, The Act of Creation, Arthur Koestler says this: ‘Language itself is never completely explicit. Words have suggestive, evocative powers; but at the same time they are merely stepping stones for thought. The artist rules his subjects by turning them into accomplices.’

That seems to be as good a definition as I know of the role of creative people in advertising. We have to try to turn our audience into accomplices; because if they aren’t our accomplices, they will be our challengers.

It’s a puzzling form of self-deception, this. Comparisons across time are meaningless. Winning things gets neither harder nor easier. The increased sophistication of your consumers, real or imagined, will affect your competitors no less than yourself. There has never been a time when advertising was expected to do anything other than work hard.

To the envious practitioners of 2040, marketing in the 1990s will presumably seem to have been a doddle. How easy, they will think, how very, very easy.

The reason it doesn’t seem so now is because it isn’t. 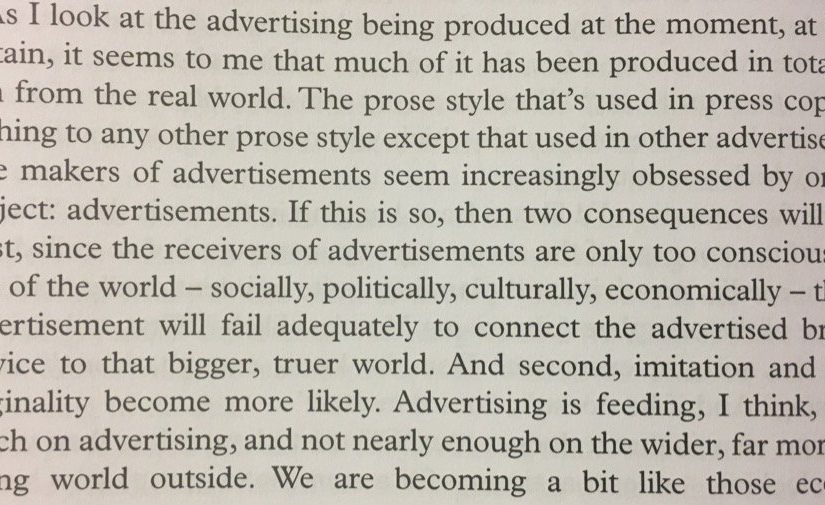 As I look at the advertising being produced at the moment, at least in Britain, it seems to me that much of it has been produced in total isolation from the real world. The prose style that’s used in press copy owes nothing to any other prose style except that used in other advertisements. The makers of advertisements seem increasingly obsessed by only one subject: advertisements. If this is so, then two consequences will follow. First, since the receivers of advertisements are only too conscious of the rest of the world – socially, politically, culturally, economically – then the advertisement will fail adequately to connect the advertised brand or service to that bigger, truer world. And second, imitation and lack of originality become more likely. Advertising is feeding, I think, far too much on advertising, and not nearly enough on the wider, far more interesting world outside.