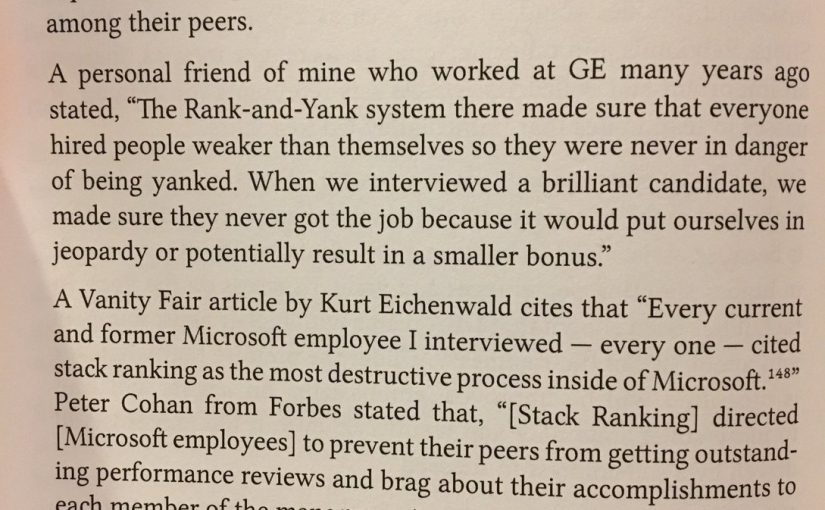 One well-known example of a dysfunctional workplace competition was GE’s “Rank-and-Yank” system, where the bottom 10% of the organization’s employees were fired on a regular basis. Another was Microsoft’s “Stack Racking” system, where an employee’s expectations for promotion were based on how they were ranked among their peers. A personal friend of mine who worked at GE many years ago stated, “The Rank-and-Yank system there made sure that everyone hired people weaker than themselves so they were never in danger of being yanked. When we interviewed a brilliant candidate, we made sure they never got the job because it would put ourselves in jeopardy or potentially result in a smaller bonus.”

A Vanity Fair article by Kurt Eichenwald cites that “Every current and former Microsoft employee I interviewed – everyone – cited stack ranking as the most destructive process inside of Microsoft. Peter Cohan from Forbes stated that, “[Stack Ranking) directed [Microsoft employees] to prevent their peers from getting outstanding performance reviews and brag about their accomplishments to each member of the management committee that determined their relative ranking.”

As you can see, workplace competition can be extremely destructive to company morale, especially during weak and uncertain economic conditions where people are preoccupied with getting laid off.

Excerpt from: Actionable Gamification: Beyond Points, Badges and Leaderboards by Yu-kai Chou