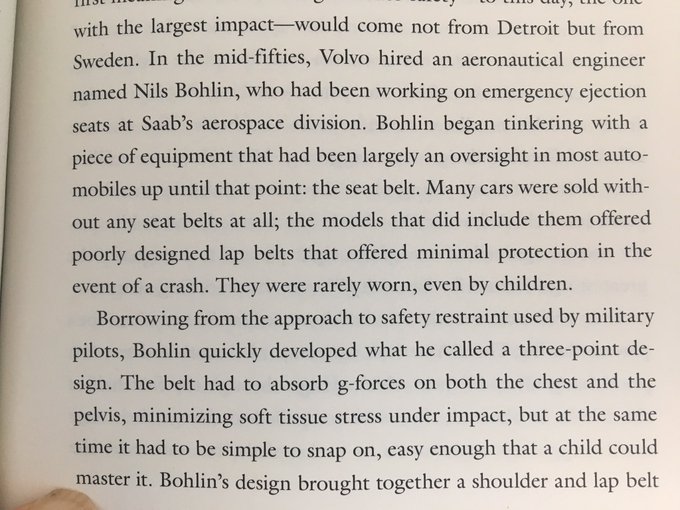 the largest impact-would come not from Detroit but from Sweden. In the mid-fifties, Volvo hired an aeronautical engineer named Nils Bohlin, who had been working on emergency ejection seats at Saab’s aerospace division. Bohlin began tinkering with a piece of equipment that had been largely an oversight in most auto­mobiles up until that point: the seat belt. Many cars were sold with­ out any seat belts at all; the models that did include them offered poorly designed lap belts that offered minimal protection in the event of a crash. They were rarely worn, even by children.

Borrowing from the approach to safety restraint used by military pilots, Bohlin quickly developed what he called a three-point de­sign. The belt had to absorb g-forces on both the chest and the pelvis, minimizing soft tissue stress under impact, but at the same time it had to be simple to snap on, easy enough that a child could master it. Bohlin’s design brought together a shoulder and lap belt that buckled together in a V formation at the passenger’s side, which meant the buckle itself wouldn’t cause injuries in a collision. It was an elegant design, the basis for the seat belts that now come standard on every car manufactured anywhere in the world. An early prototype of the shoulder strap had decapitated a few crash dummies, which led to a rumor that the seat belt itself could kill you in a crash. To combat those rumors, Volvo actually hired a race-car driver to perform death-defying stunts-deliberately rolling his car at high speeds-all the time wearing Nils Bohlin’s three-point seat belt to stay safe,

By 1959, Volvo was selling cars with the three-point seat belt as a standard feature. Early data suggested that this-one addition was single-handedly reducing auto fatalities by 75 percent. Three years later, Bohlin was granted patent number US3043625A by the US Patent and Trademark Office for a “Three-point seat belt systems comprising two side lower and one side upper anchoring devices.” Recognizing the wider humanitarian benefits of the technology, Volvo chose not to enforce the patent-making Bohlin’s design freely available to all car manufacturers worldwide. The ultimate effect of Bohlin’s design was staggering. More than one million lives-many of them young ones-have been saved by the three-point seat belt. A few decades after it was awarded, the Bohlin Patent was recognized as one of the eight patents to have had “the greatest significance for the humanity” over the preceding century.

Excerpt from: Extra Life: A Short History of Living Longer by Steven Johnson