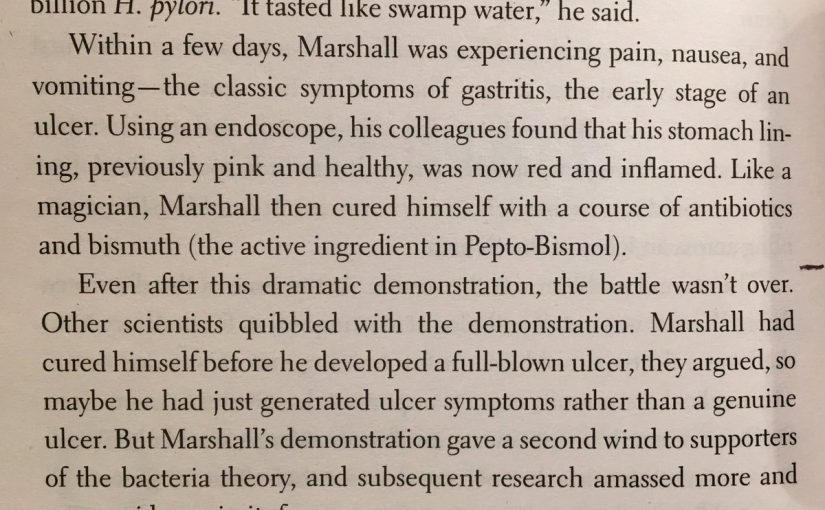 One morning in 1984 Barry Marshall skipped breakfast and asked his colleagues to meet him in the lab. While they watched in horror, he chugged a glass filled with about a billion H. pylori. It tasted like swamp water”, he said.

Within a few days, Marshall was experiencing pain, nauseam and vomiting — the classic symptoms of gastritis, the early stage of an ulcer. Using an endoscope, his colleagues found that his stomach lining, previously pink and healthy, was now red an inflamed. Like a magician, Marshal then cured himself with a course of antibiotics and bismuth (the active ingredient in Pepto-Bismol).

Even after this dramatic demonstration, the battle wasn’t over. Other scientists quibbled with the demonstration. Marshall had cued himself before he developed a full-blown ulcer, they argued, so maybe he had just generated ulcer symptoms rather than a genuine ulcer. But Marshall’s demonstration gave a second wind to supporters of the bacteria theory, and subsequent research amassed more and more evidence in his favor.

In 1994, ten years later, the National Institutes of Health finally endorsed the idea that antibiotics were the preferred treatment for ulcers.