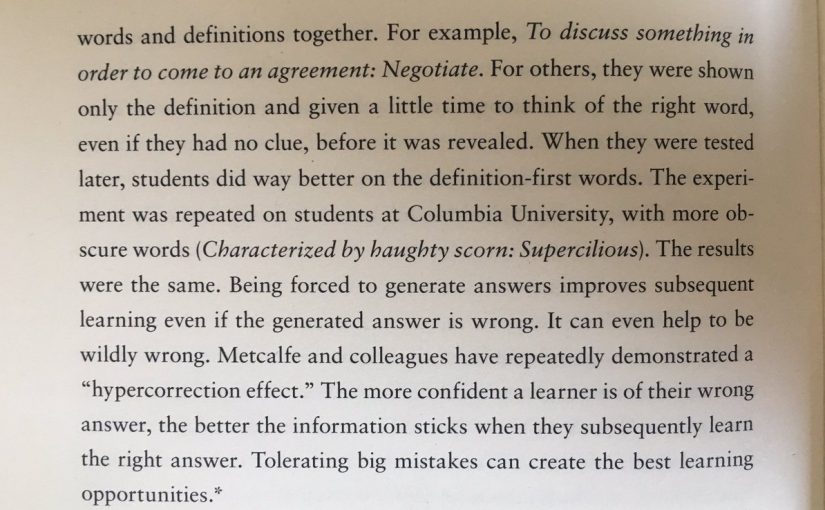 One of those desirable difficulties is known as the “generational effect.” Struggling to generate an answer on your own, even a wrong one, enhances subsequent learning. Socrates was apparently on to something when he forces pupils to generate answers rather than bestowing them. It requires the learner to intentionally sacrifice current performance for future benefit.

Kornell and psychologist Janet Metcalfe tested sixth graders in the South Bronx on vocabulary learning, and varied how they studied in order to explore the generation effect. Students were given some of the words and definitions together. For example, To discuss something in order to come to an agreement: Negotiate. For others, they were shown the only definition and given a little time to think of the right word, even if they had no clue, before it was revealed. When they were tested later, students did way better on the definition-first words. The experiment was repeated on students at Columbia University, with more obscure words (Characterized by haughty scorn: Supercilious). The results were the same. Being forced to generate answers improves subsequent learning even if the generated answer is wrong. It can even help to be wildly wrong. Metcalfe and colleagues have repeatedly demonstrated a “hypercorrection effect.” The more confident a learner is of their wrong answer, the better the information sticks when they subsequently learn the right answer. Tolerating big mistake can create the biggest learning opportunities.