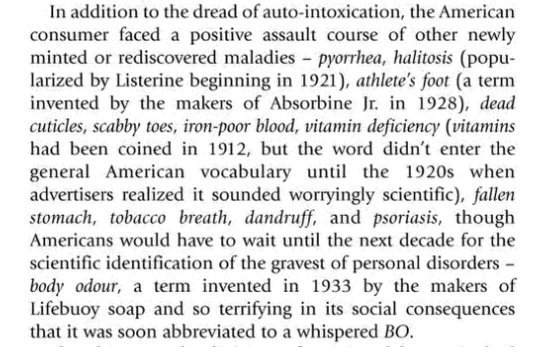 In addition to the dread of auto-intoxication, the American consumer faced a positive assault course of other newly minted or rediscovered maladies – pyorrhea, halitosis (popularized by Listerine beginning in 1921), athlete’s foot (a term invented by the makers of Absorbiner in 1928), dead cuticles, scabby toes, iron-poor blood, vitamin deficiency (vitamins had been coined in 1912, but the word didn’t enter the general American vocabulary until the 1920s when advertisers realized it sounded worryingly scientific), fallen stomach, tobacco breath, dandruff, and psoriasis, though Americans would have to wait until the next decade for the scientific identification of the gravest of personal disorders – body odour, a term invented in 1933 by the makers of Lifebuoy soap and so terrifying in its social consequences that it was soon abbreviated to a whispered BO.

Excerpt from: Made In America: An Informal History of American English by Bill Bryson