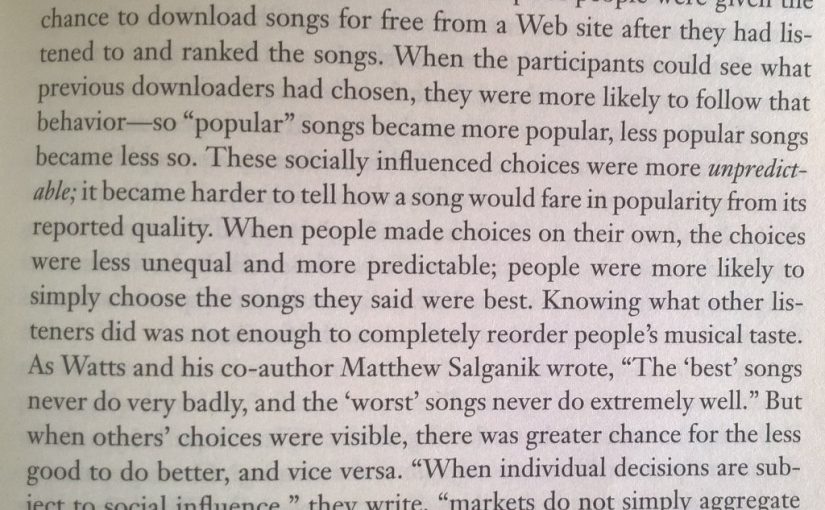 This was what the network scientist Duncan Watts and colleagues found in a famous 2006 experiment. Groups of people were given the chance to download songs for free from a Web site after they had listened to and ranked the songs. When the participants could see what previous downloaders had chosen, they were more likely to follow that behavior so popular songs became more popular, less popular songs became less so. These socially influenced choices were more unpredictable; it became harder to tell how a song would fare in popularity from its reported quality. When people made choices on their own, the choices were less unequal and more predictable; people were more likely to simply choose the songs they said were best. Knowing what other listeners did was not enough to completely reorder people’s musical taste. As Watts and his co-author Matthew Salganik wrote, “The ‘best’ songs never do very badly, and the ‘worst’ songs never do extremely well.” But when others’ choices were visible, there was greater chance for the less good to do better, and vice versa. “When individual decisions are subject to social influence,” they write, “markets do not simply aggregate pre-existing individual preference.” The pop chart, in other words, just like taste itself does not operate in a vacuum.

Excerpt from: You May Also Like: Taste in an Age of Endless Choice by Tom Vanderbilt