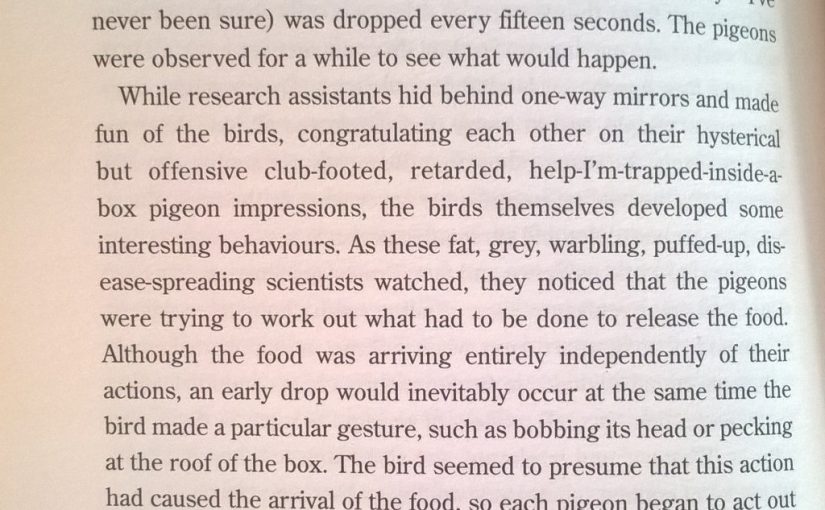 In 1948, a man called B. F. Skinner put hungry pigeons into glass boxes. We’ve all done it. He had a feeder attached to each box through which pigeon food (fag ends and sick, presumably – I’ve never been sure) was dropped every fifteen seconds. The pigeons were observed for a while to see what would happen.

While research assistants hid behind one-way mirrors and made fun of the birds, congratulating each other on their hysterical but offensive club-footed, retarded, help-I’m-trapped-inside-a-box pigeon impressions, the birds themselves developed some interesting behaviours. As these fat, grey, warbling, puffed-up, disease-spreading scientists watched, they noticed that the pigeons were trying to work out what had to be done to release the food. Although the food was arriving entirely independently of their actions, an early drop would inevitably occur at the same time the bird made a particular gesture, such as bobbing its head or pecking at the roof of the box. The bird seemed to presume that this action had caused the arrival of the food, so each pigeon began to act out a ritual inside its box consisting of repeated actions misguidedly designed to trigger more food. Some would walk around in circles, others would peck repeatedly in the corner, and so on.

Excerpt from: Tricks of the Mind by Derren Brown