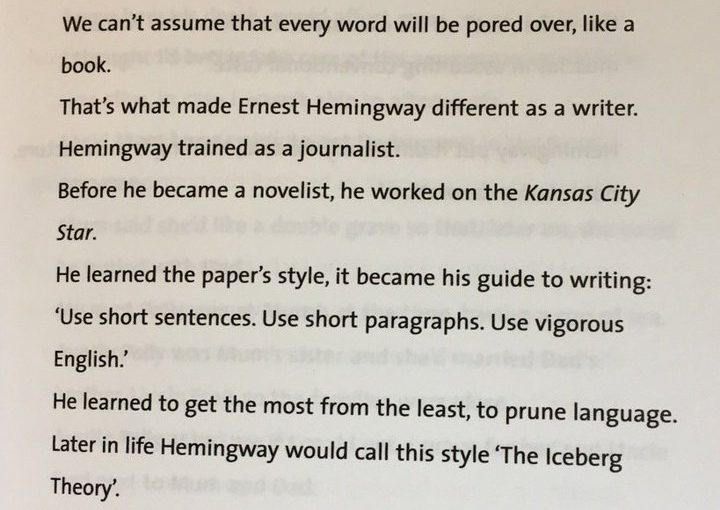 A book may take months to write.

Thats okay because people can take weeks to read it, savouring each word.

Copy has to compete for attention.

We can’t assume that every word will be pored over, like a book.

That’s what made Ernest Hemingway different as a writer.

Before he became a novelist, he worked on the Kansas City Star.

He learned the paper’s style, it became his guide to writing:

‘Use short sentence. Use short paragraphs. Use vigorous English.’

He learned to get the most from the least, to prune language.

Later in life Hemingway would call this style ‘The Iceberg Theory’.

By stating the bar minimum, you let the reader’s imagination add the part unsaid, the part below the surface.

In writing classes at universities it’s now known as ‘The Theory of Omission’. 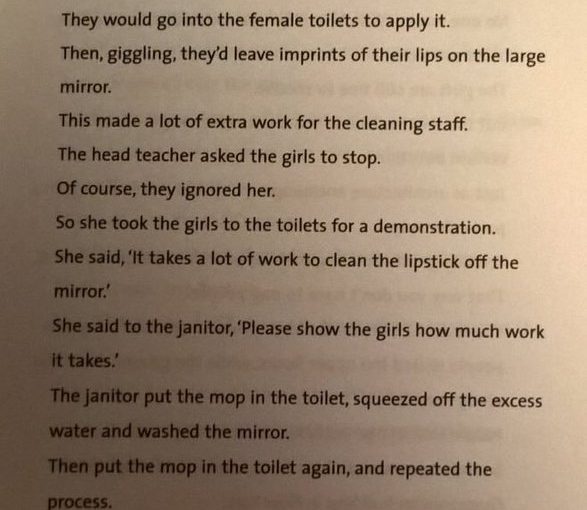 At a school in the USA, the girls in their early teens had just discovered lipstick.

They would go into the female toilets to apply it.

Then, giggling, they’d leave imprints of their lips on the large mirror.

This made a lot of extra work for the cleaning staff.

The head teacher asked the girls to stop.

Of course, they ignored her.

So she took the girls to the toilets for a demonstration.

She said, ‘It takes a lot of work to clean the lipstick off the mirror.’

She said to the janitor, ‘Please show the girls how much work it takes.’

The janitor put the mop in the toilet, squeezed off the excess water and washed the mirror.

Then put the mop in the toilet again, and repeated the process. From that day on there was no more lipstick on the mirror. 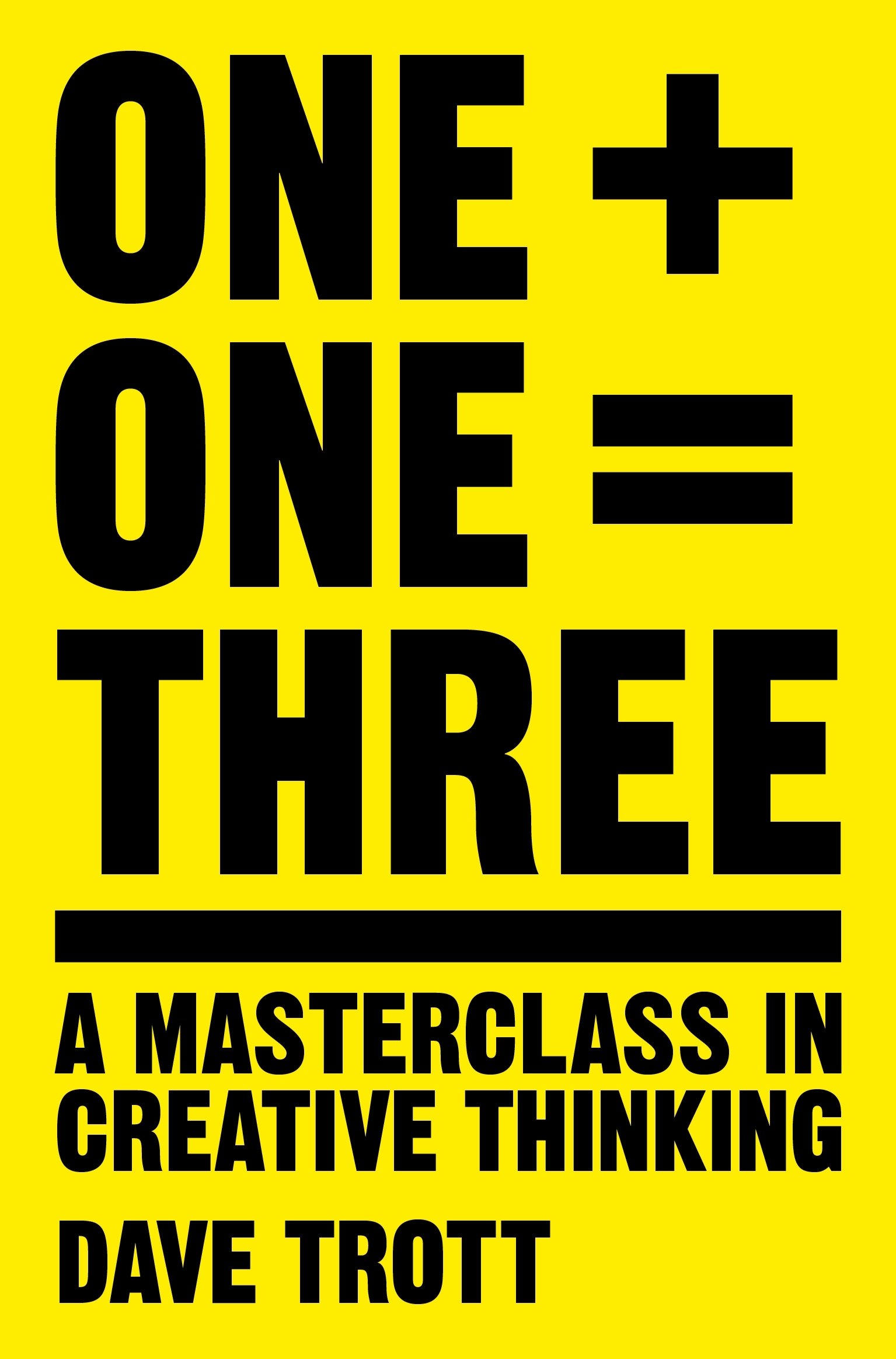 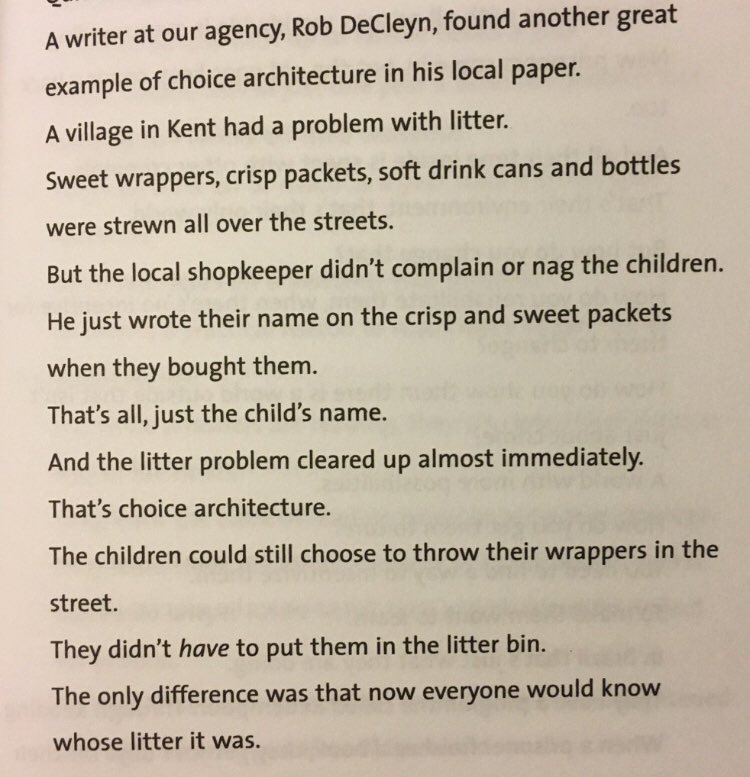 A writer at out agency, Rob DeCleyn, found another great example of choice architecture in his local paper.

A village in Kent had a problem with litter.

Sweet wrappers, crisp packers, soft drink cans and bottles were strewn all over the streets.

But the local shopkeeper didn’t complain or nag the children.

He just wrote their name on the crisp and sweet packets when they bought them.

That’s all, just the child’s name.

And the litter problem cleared up almost immediately.

The children could still choose to throw their wrappers in the street.

They didn’t have to put them in the litter bin.

The only difference was that now everyone would know whose litter it was. 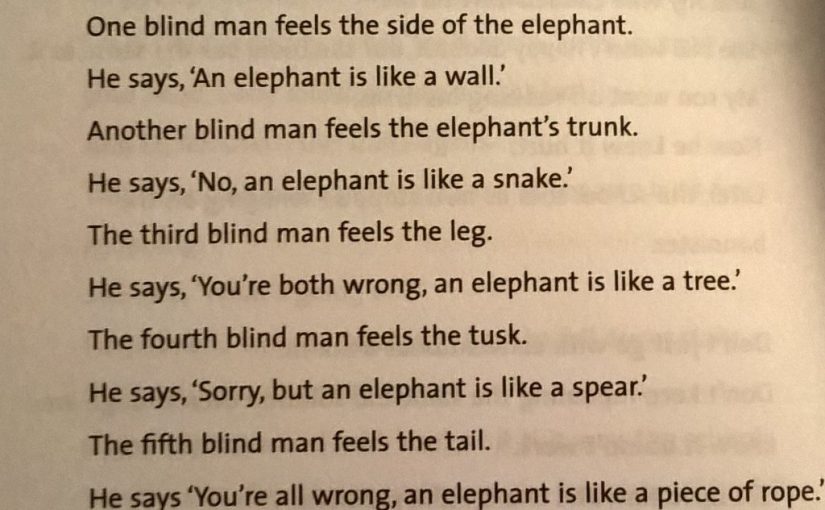 This is illustrated by the parable of five blind men walking into an elephant.

Each tries to describe what they’ve bumped into.

One blind man feels the side of the elephant.

He says, ‘You’re both wrong, an elephant is like a tree.’

He says, ‘Sorry, but an elephant is like a spear.’

He says ‘You’re all wrong, an elephant is like a piece of rope.’

All of the blind men mistake their little bit of truth for the whole truth. 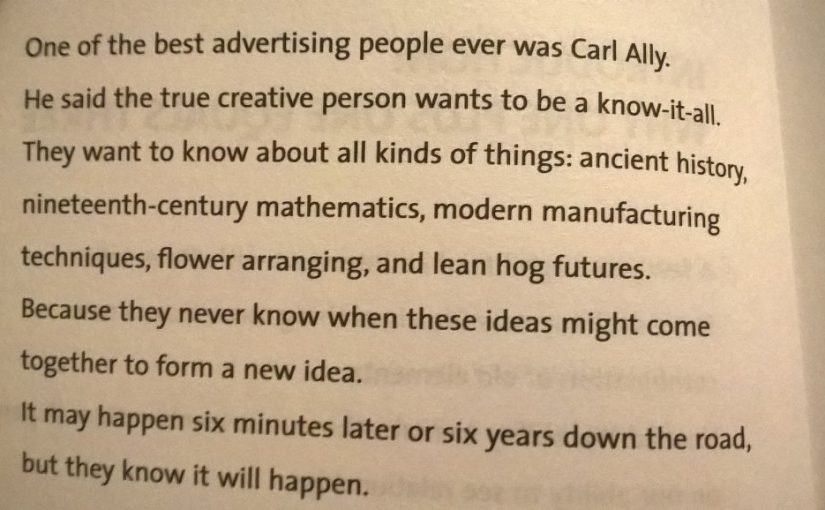 One of the best advertising people ever was Carl Ally.

He said the true creative person wants to be a know-it-all.

Because they never know when these ideas might come together to form a new idea.

It may happen six minutes later or six years down the road, but they know it will happen.