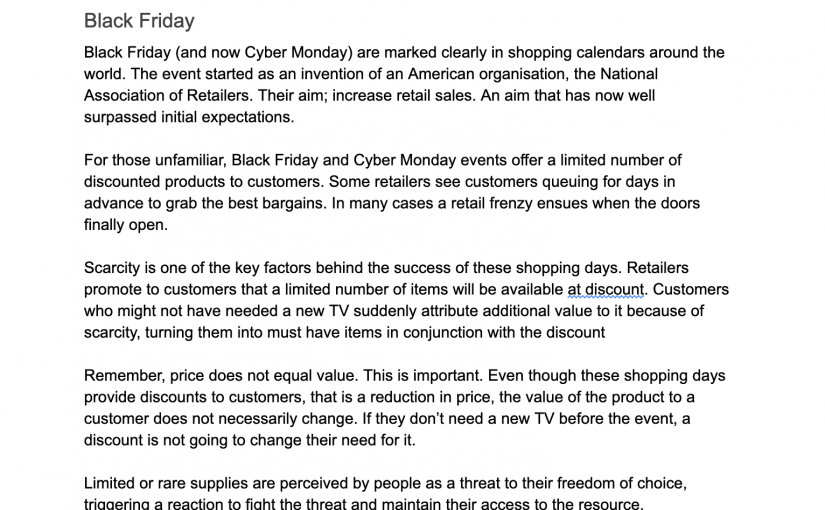 Black Friday (and now Cyber Monday) are marked clearly in shopping calendars around the world. The event started as an invention of an American organisation, the National Association of Retailers. Their aim; increase retail sales. An aim that has now well surpassed initial expectations.

For those unfamiliar, Black Friday and Cyber Monday events offer a limited number of discounted products to customers. Some retailers see customers queuing for days in advance to grab the best bargains. In many cases a retail frenzy ensues when the doors finally open.

Scarcity is one of the key factors behind the success of these shopping days. Retailers promote to customers that a limited number of items will be available at discount. Customers who might not have needed a new TV suddenly attribute additional value to it because of scarcity, turning them into must have items in conjunction with the discount

Remember, price does not equal value. This is important. Even though these shopping days provide discounts to customers, that is a reduction in price, the value of the product to a customer does not necessarily change. If they don’t need a new TV before the event, a discount is not going to change their need for it.

Limited or rare supplies are perceived by people as a threat to their freedom of choice, triggering a reaction to fight the threat and maintain their access to the resource. 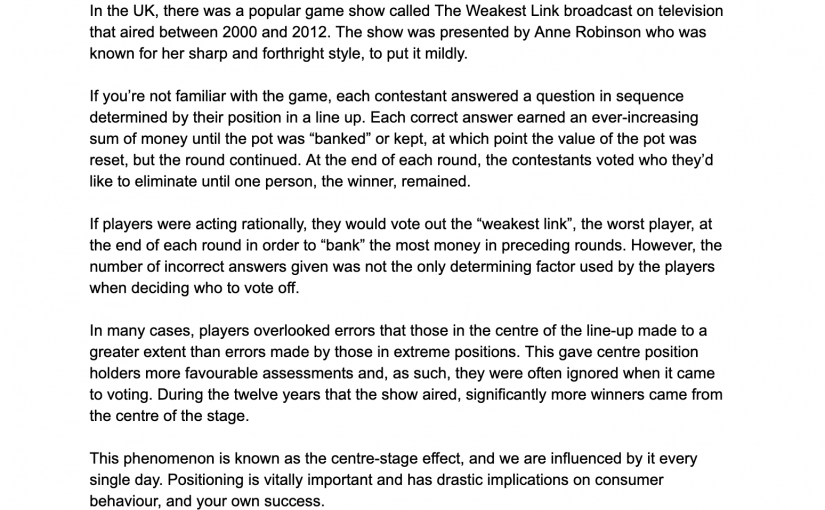 In the UK, there was a popular game show called The Weakest Link broadcast on television that aired between 2000 and 2012. The show was presented by Anne Robinson who was known for her sharp and forthright style, to put it mildly.

If you’re not familiar with the game, each contestant answered a question in sequence determined by their position in a line up. Each correct answer earned an ever-increasing sum of money until the pot was “banked” or kept, at which point the value of the pot was reset, but the round continued. At the end of each round, the contestants voted who they’d like to eliminate until one person, the winner, remained.

If players were acting rationally, they would vote out the “weakest link”, the worst player, at the end of each round in order to “bank” the most money in preceding rounds. However, the number of incorrect answers given was not the only determining factor used by the players when deciding who to vote off.

In many cases, players overlooked errors that those in the centre of the line-up made to a greater extent than errors made by those in extreme positions. This gave centre position holders more favourable assessments and, as such, they were often ignored when it came to voting. During the twelve years that the show aired, significantly more winners came from the centre of the stage.

This phenomenon is known as the centre-stage effect, and we are influenced by it every single day. Positioning is vitally important and has drastic implications on consumer behaviour, and your own success. 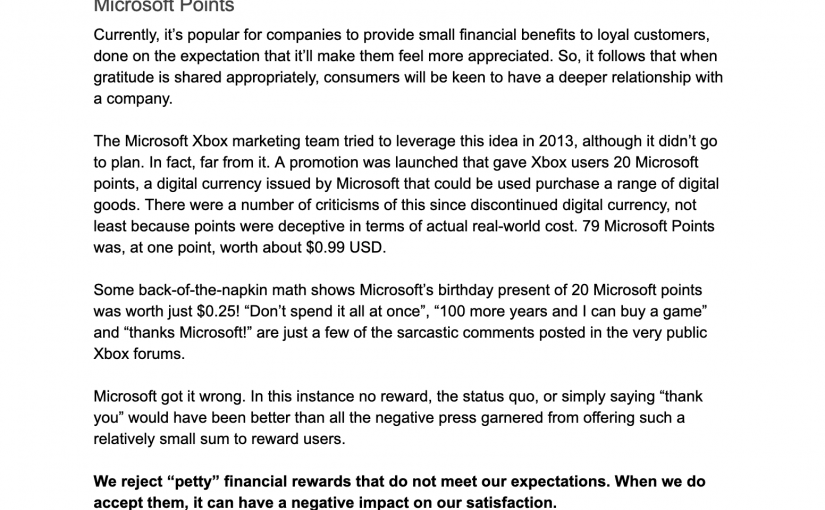 A promotion was launched that gave Xbox users 20 Microsoft points, a digital currency issued by Microsoft that could be used purchase a range of digital goods. There were a number of criticisms of this since discontinued digital currency, not least because points were deceptive in terms of actual real-world cost. 79 Microsoft Points was, at one point, worth about $0.99 USD.

Some back-of-the-napkin math shows Microsoft’s birthday present of 20 Microsoft points was worth just $0.25! “Don’t spend it all at once”, “100 more years and I can buy a game” and “thanks Microsoft!” are just a few of the sarcastic comments posted in the very public Xbox forums.

Microsoft got it wrong. In this instance no reward, the status quo, or simply saying “thank you” would have been better than all the negative press garnered from offering such a relatively small sum to reward users.

We reject “petty” financial rewards that do not meet our expectations. When we do accept them, it can have a negative impact on our satisfaction. 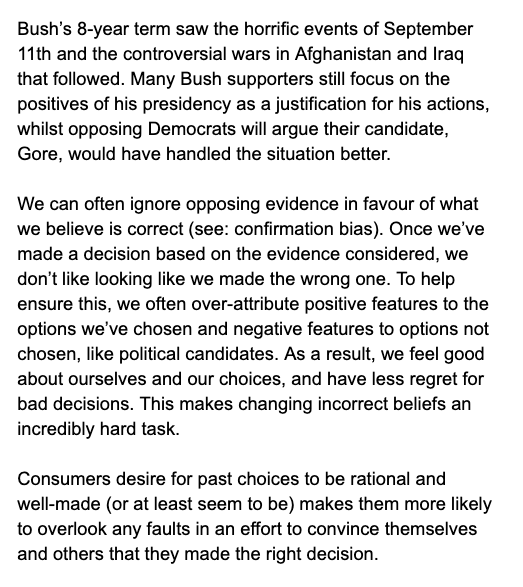 Bush’s 8-year term saw the horrific events of September 11th and the controversial wars in Afghanistan and Iraq that followed. Many Bush supporters still focus on the positives of his presidency as a justification for his actions, whilst opposing Democrats will argue their candidate, Gore, would have handled the situation better.

We can often ignore opposing evidence in favour of what we believe is correct (see: confirmation bias). Once we’ve made a decision based on the evidence considered, we don’t like looking like we made the wrong one. To help ensure this, we often over-attribute positive features to the options we’ve chosen and negative features to options not chosen, like political candidates. As a result, we feel good about ourselves and our choices, and have less regret for bad decisions. This makes changing incorrect beliefs an incredibly hard task.

Consumers desire for past choices to be rational and well-made (or at least seem to be) makes them more likely to overlook any faults in an effort to convince themselves and others that they made the right decision. 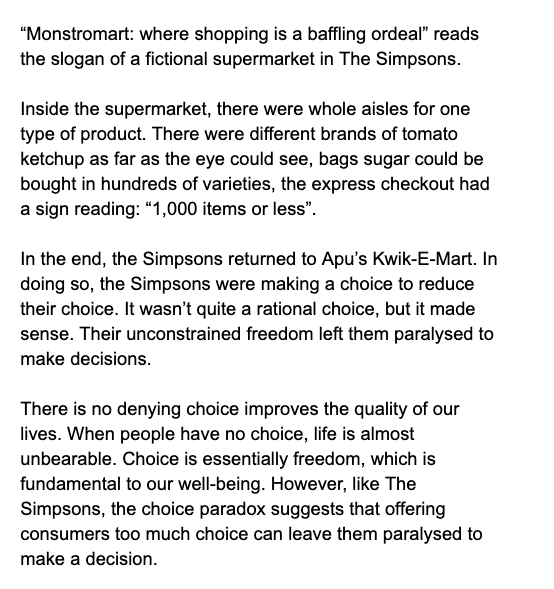 “Monstromart: where shopping is a baffling ordeal” reads the slogan of a fictional supermarket in The Simpsons.

Inside the supermarket, there were whole aisles for one type of product. There were different brands of tomato ketchup as far as the eye could see, bags sugar could be bought in hundreds of varieties, the express checkout had a sign reading: “1,000 items or less”.

In the end, the Simpsons returned to Apu’s Kwik-E-Mart. In doing so, the Simpsons were making a choice to reduce their choice. It wasn’t quite a rational choice, but it made sense. Their unconstrained freedom left them paralysed to make decisions.

There is no denying choice improves the quality of our lives. When people have no choice, life is almost unbearable. Choice is essentially freedom, which is fundamental to our well-being. However, like The Simpsons, the choice paradox suggests that offering consumers too much choice can leave them paralysed to make a decision. 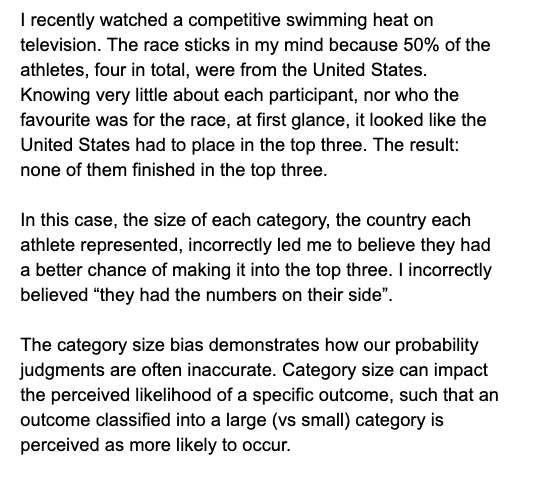 I recently watched a competitive swimming heat on television. The race sticks in my mind because 50% of the athletes, four in total, were from the United States. Knowing very little about each participant, nor who the favourite was for the race, at first glance, it looked like the United States had to place in the top three. The result: none of them finished in the top three.

In this case, the size of each category, the country each athlete represented, incorrectly led me to believe they had a better chance of making it into the top three. I incorrectly believed “they had the numbers on their side”.

The category size bias demonstrates how our probability judgments are often inaccurate. Category size can impact the perceived likelihood of a specific outcome, such that an outcome classified into a large (vs small) category is perceived as more likely to occur. 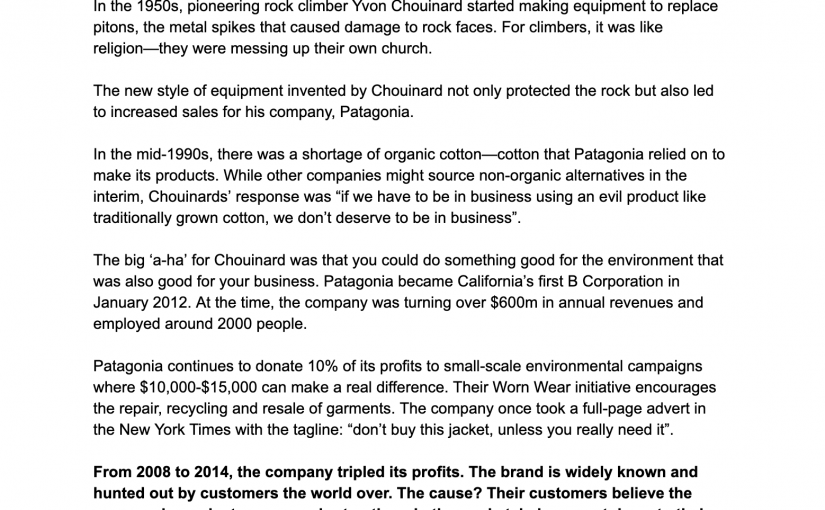 In the mid-1990s, there was a shortage of organic cotton—cotton that Patagonia relied on to make its products. While other companies might source non-organic alternatives in the interim, Chouinard’s’ response was “if we have to be in business using an evil product like traditionally grown cotton, we don’t deserve to be in business”.

The big ‘a-ha’ for Chouinard was that you could do something good for the environment that was also good for your business. Patagonia became California’s first B Corporation in January 2012. At the time, the company was turning over $600m in annual revenues and employed around 2000 people.

Patagonia continues to donate 10% of its profits to small-scale environmental campaigns where $10,000-$15,000 can make a real difference. Their Worn Wear initiative encourages the repair, recycling and resale of garments. The company once took a full-page advert in the New York Times with the tagline: “don’t buy this jacket, unless you really need it”. 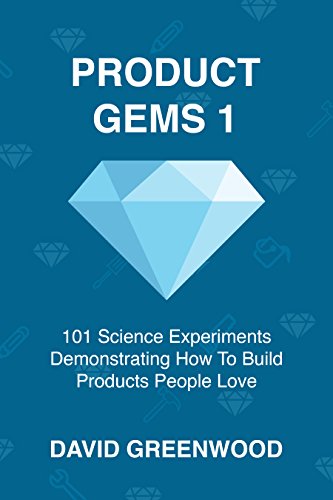