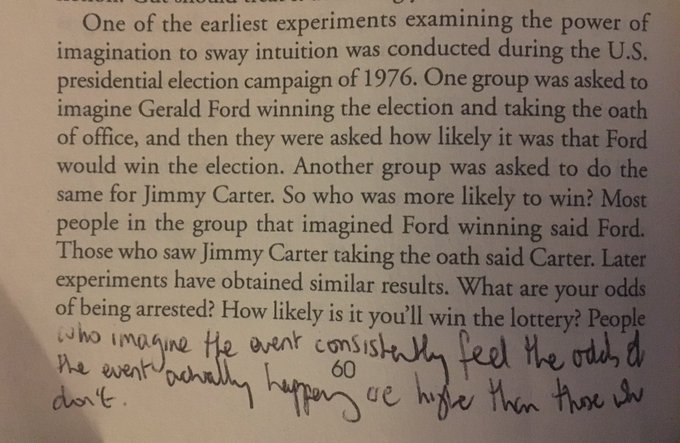 One of the earliest experiments examining the power of imagination to sway intuition was conducted during the U.S. presidential election campaign of 1976. One group was asked to imagine Gerald Ford winning the election and taking the oath of office, and then they were asked how likely it was that Ford would win the election. Another group was asked to do the same for Jimmy Carter. So who was more likely to win? Most people in the group that imagined Ford winning said Ford. Those who saw Jimmy Carter taking the oath said Carter. Later experiments have obtained similar results. What are your odds of being arrested? How likely is it you’ll win the lottery? People who imagine the event consistently feel the odds or the event actually happening are higher than those who don’t. 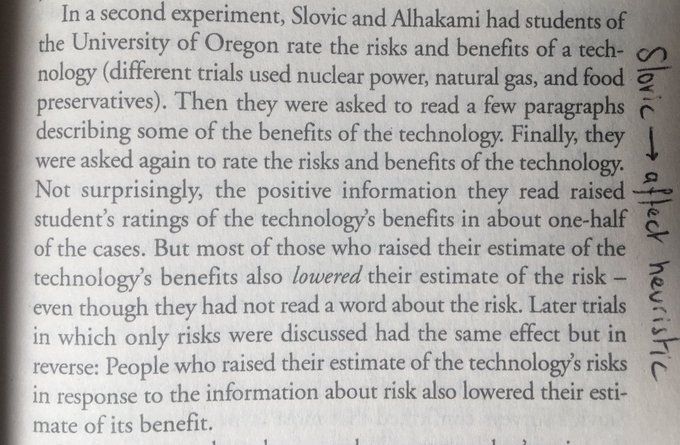 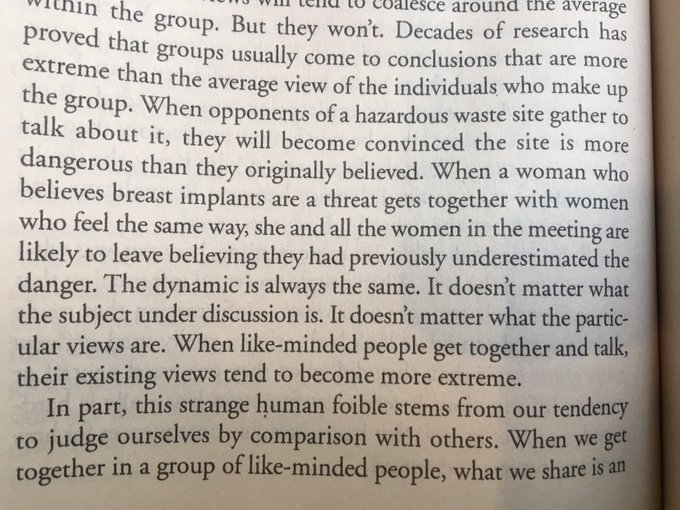 But they won’t. Decades of research has proved that groups usually come to conclusions that are more extreme than the average view of the individuals who make up the group. When opponents of a hazardous waste site gather to talk about it, they will become convinced the site is more dangerous than they originally believed. When a woman who believes breast implants are a threat gets together with women who feel the same way, she and all the women in the meeting are likely to leave believing they had previously underestimated the danger. The dynamic is always the same. It doesn’t matter what the subject under discussion is. It doesn’t matter what the particular views are. When like-minded people get together and talk, their existing views tend to become more extreme.

In part, this strange human foible stems from our tendency to judge ourselves by comparison with others. When we get together in a group of like-minded people, what we share is an opinion that we all believe to be correct and so we compare ourselves with others in the group by asking ‘How correct am I?’ Inevitably, most people in the group will discover that they do not hold the most extreme opinion, which suggests they are less correct, less virtuous, than others. And so they become more extreme. Psychologists confirmed this theory when they put people in groups and had them state their views without providing reasons why – and polarization still followed. 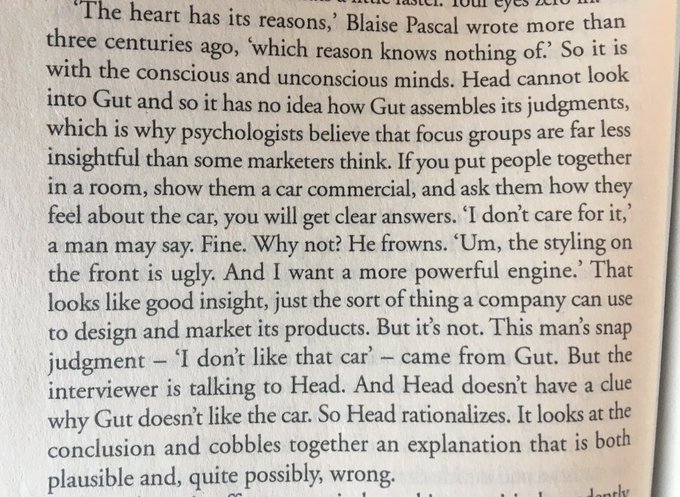 ‘The heart has its reasons,’ Blaise Pascal wrote more than three centuries ago, ‘which reason knows nothing of’. Sot with the conscious and unconscious minds. Head cannot look into Gut and so it has no idea how Gut assembles its judgments, which is why psychologists believe that focus groups are far less insightful than some marketers think. If you put people together in a room, show them a car commercial, and ask them how they feel about the car, you will get clear answers. ‘I don’t care for it,’ a man may say. Fine. Why not? He frowns. ‘Um, the styling on the front is ugly. And I want a more powerful engine.’ That looks like good insight, just the sort of thing a company can use to design and market its products. But it’s not. This man’s snap judgment – ‘I don’t like that car’ – came from Gut. But the interviewer is talking to Head. And Head doesn’t have a clue why Gut doesn’t like the car. So Head rationalizes. It looks at the conclusion and cobbles together an explanation that is both plausible and quite possibly, wrong. 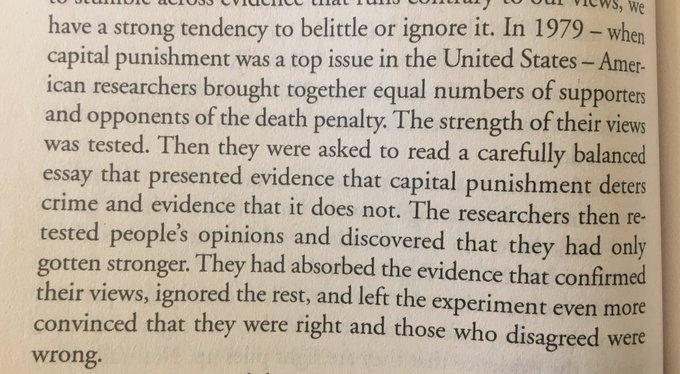 In 1979 – when capital punishment was a top issue in the United States – American researchers brought together equal numbers of supporters and opponents of the death penalty. The strength of their views was tested. Then they were asked to read a carefully balanced essay that presented evidence that capital punishment deters crime and evidence that it does not. The researchers then retested people’s opinions and discovered that they had only gotten stronger. They had absorbed the evidence that confirmed their views, ignored the rest, and left the experiment even more convinced that they were right and those who disagreed were wrong. 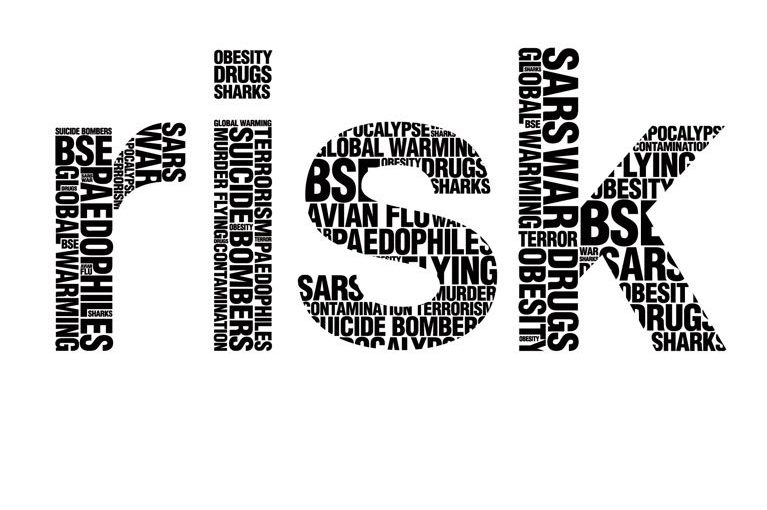