If we take the UK’s most listened-to radio show- BBC Radio 2’s Breakfast Show – then the songwriter can expect the Performing Right Society for Music expect Phonographic Performance Limited (PPL) to collect roughly £60. Stare at a royalty statement which lists £150 for a spin alongside £0.005 for a stream and you can understand the fear of letting go of the old wine.

But the economics don’t support that fear. A ‘spin’ on BBC Radio 2’s Breakfast Show will reach 8 million people; you need therefore to divide the £150 by the 8 million pairs of ears to get a comparative unit value per listener, and this results in £0.00002 – which is less than half a percent of the £ 0.005 that you would get from one unique person on a streaming service. What’s more, this is not an either/or comparison as those who listen to it on the radio may be more inclined to stream it on Spotify. To bring this calculation full circle, had those 8 million listeners streamed the song on Spotify (which is not beyond the realms of possibility), a cheque of £40,000 would be paid across to the artist and songwriter – not £150.  ‘Not too shabby’ as some Americans like to say. 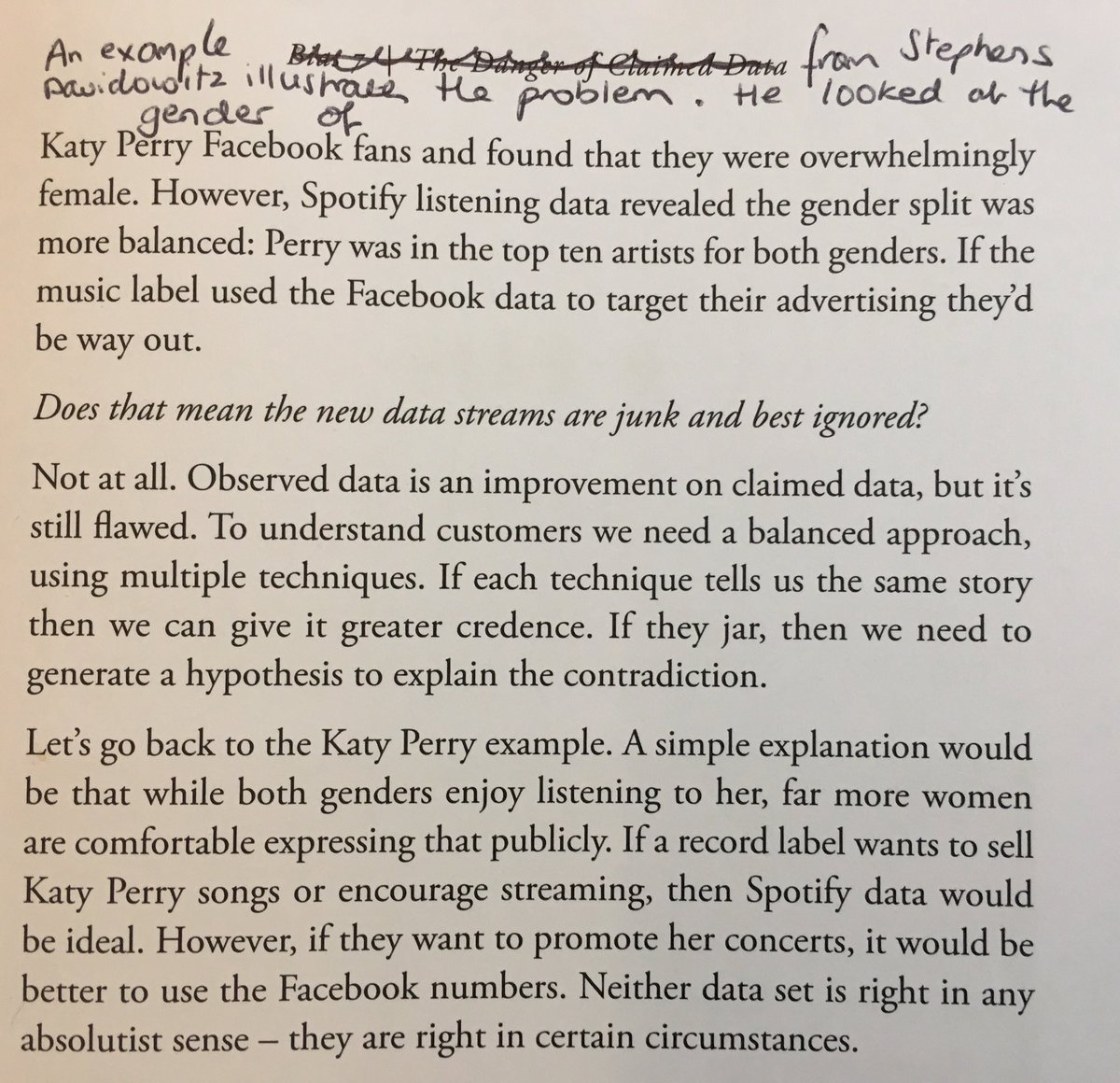 An example from Seth Stephens-Davidowitz illustates the problem. He looked at the gender of Katy Perry Facebook fans and found that they were overwhelmingly female. However, Spotify listening data revealed the gender split was much more balanced: Perry was in the top ten artists for both genders. If the music label used the Facebook data to target their advertising they’d be way out.

Does that mean the new data streams are junk and best ignored?

Not at all. Observed data is an improvement on claimed data, but it’s still flawed. To understand customers we need a balanced approach, using multiple techniques. If each technique tells us the same story then we can give it greater credence. If they jar then we need to generate a hypothesis to explain the contradiction.

Let’s go back to the Katy Perry example. A simple explanation would be that while both genders enjoy listening to her, far more women are comfortable expressing that publicly. If a record label wants to sell Katy Perry songs or encourage streaming, then Spotify data would be ideal. However, if they want to promote her concerts, it would be better to use the Facebook numbers. Neither data set is right in any absolutist sense – they are right in certain circumstances.