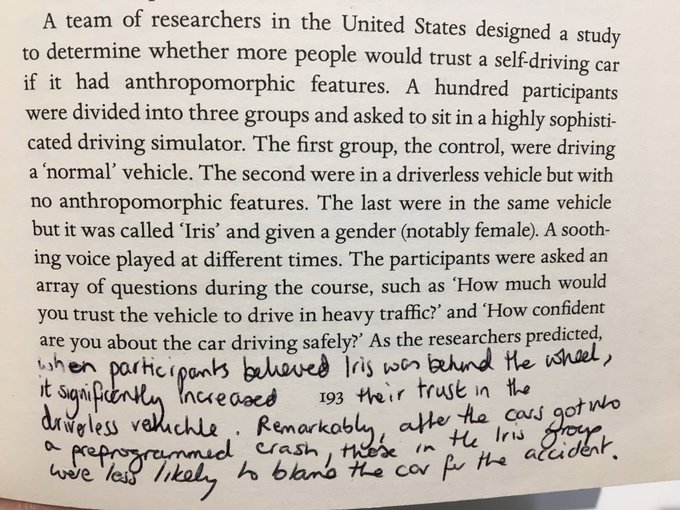 A team of researchers in the United States designed a study to determine whether more people would trust a self-driving car if it had anthropomorphic features. A hundred participants were divided into three groups and asked to sit in a highly sophisticated driving simulator. The first group, the control, were driving a ‘normal’ vehicle. The second were in a driverless vehicle but with no anthropomorphic features. The last were in the same vehicle but it was called ‘Iris’ and given a gender (notably female). A soothing voice played at different times. The participants were asked an array of questions during the course, such as ‘How much would you trust the vehicle to drive in heavy traffic?’ and ‘How confident are you about the car driving safely?’ As the researchers predicted, when participants believed Iris was behind the wheel, it significantly increased their trust in the driverless vehicle. Remarkably, after the cars got into a preprogrammed crash, those in the Iris group were less likely to blame the car for the accident.

Excerpt from: Who Can You Trust?: How Technology Brought Us Together and Why It Might Drive Us Apart by Rachel Botsman