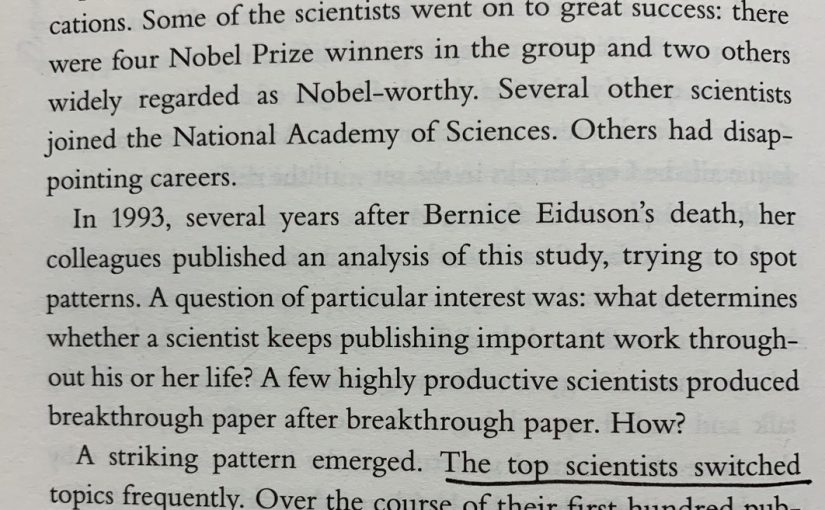 In 1958, a young psychologist by the name of Bernice Eiduson began a long-term study of the working methods of forty mid-career scientists. For twenty years, Professor Eiduson periodically interviewed the scientists and gave them a variety of psychological tests, as well as gathering data on their publications. Some of the scientists went on to great success: there were four Nobel Prize winners in the group and two others widely regarded as Nobel-worthy. Several other scientists joined the National Academy of Sciences. Others had disappointing careers.

In 1993, several years after Bernice Eiduson’s death, her colleagues published an analysis of this study, trying to spot patterns. A question of particular interest was: what determines whether a scientist keeps publishing important work throughout his or her life? A few highly productive scientists produced breakthrough paper after breakthrough paper. How?

A striking pattern emerged. The top scientists switched topics frequently. Over the course of their first hundred published papers, the long-lived high-impact researchers switched topics an average of 43 times. The leaps were less dramatic than the ones Erez Aiden likes to take, but the pattern is the same: the top scientists keep changing the subject if they wish to stay productive.

Excerpt from: Messy: How to Be Creative and Resilient in a Tidy-Minded World by Tim Harford